After completing the tutorial, you will receive the following rewards: 1 reward point, 1 keg, 100 ore, 100 scrap, 100 meteorite powder. But what do these rewards mean? What can you do with them? In this lesson, we will give you an insight on what the different currencies and resources in Gwent are and what you can use them for.

Reward Points can be spent in the Reward Book. You can learn more about the best ways to spend them by looking at our Reward Points lesson when you are finished with this lesson.

There are three ways to earn Reward Points:

To see all the contracts in the game, your progress on them, and which you have completed, click on your name in the top-left corner in the home screen. There are a lot of different contracts in the game that make earning RP easier and more interesting. Some of the basic ones are completed by just opening a keg or crafting a card, others give you an incentive to play different factions and win in crazy ways. 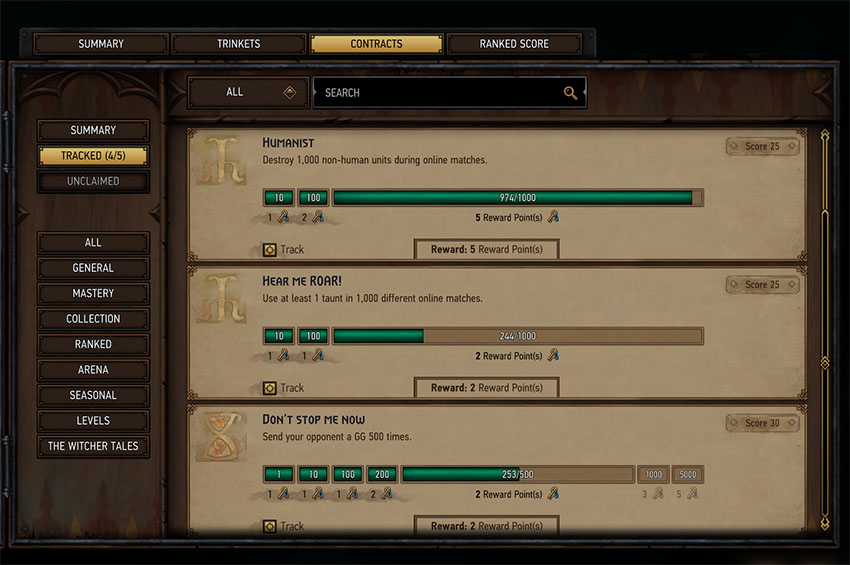 You may track your progress on up to five contracts in your profile screen, which causes in-game notifications to pop up when you complete an action that progresses the contract.

Every 24 hours, you can earn 2 RP for the first 6 rounds (not games!) won, another 2 RP for a total of 18 rounds won, and 1 last RP each for 42 and 66 rounds won. This sums up to 6 RP in total in one day, although winning 66 rounds of Gwent is a lot! You also will earn 1 RP per week through the daily log-in bonus system, which is awarded after your third day of signing in to Gwent. This cycle repeats each time you sign in to Gwent on seven unique days.

Playing any amount of Ranked games will guarantee some RP at the end of each competitive season, which each last one month. The graphic below provides a breakdown of RP awarded based on the highest rank achieved during the season. Don’t worry; you cannot drop rank during the season, so keep playing to shoot for the best rank and rewards you can reach! 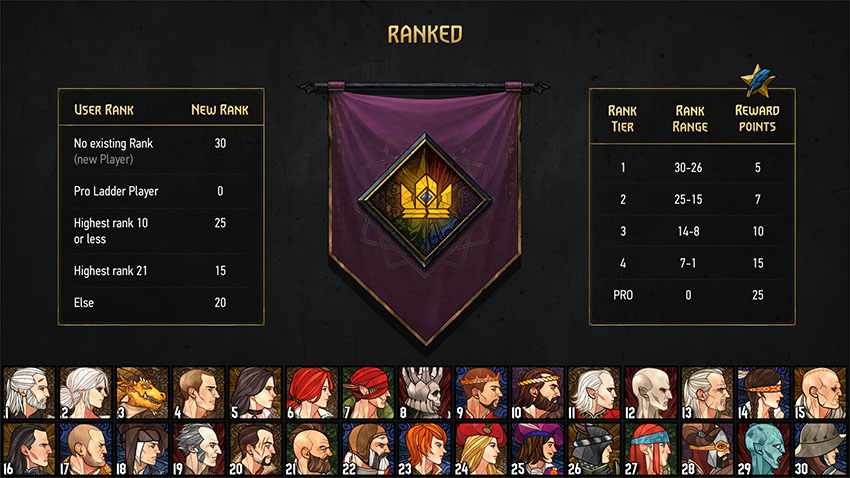 Ore is used to buy card kegs in the store at 100 ore each, or buy an entry ticket to the Arena game mode for 150 ore. You can obtain ore by spending RP in the Reward Book, by completing daily quests, and finishing an Arena run. You also receive 25 ore per week from the daily log-in bonus system.

Outside of the obvious use of spending your ore on kegs, you should consider spending it on Arena runs. They offer very good value for the 150 ore investment by guaranteeing a keg and some extra resources (randomly determined to be ore, scraps and/or meteorite powder). You can get your entire investment of 150 ore back with a record as low as 1 win and 3 losses (in the form of 1 keg and 50 ore). The rewards can be quite massive for a maximum 9-win run as well, providing a random Legendary card and tons of resources.

If you don’t enjoy Arena or don’t feel comfortable competing in the mode yet that is perfectly fine as well and many players feel the same. Buying kegs and playing in Casual or Ranked is still the standard way of building your collection and will reward you with resources quickly.

Scraps are used to craft any card you want. The standard version of cards cost 30 scraps for Common cards, 80 scraps for Rares, 200 scraps for Epic cards, and 800 scraps for Legendary cards. You obtain Scraps mainly by spending RP in the Reward Book and milling your spare cards, but we can also pick them up with “Good Game” bonuses granted by our opponents or twice per week through the daily log-in bonus system.

At the start of your Gwent career, you will not have a lot of scraps. Milling cards that you may want to play later is a bad economic decision, as you will get a lot more scraps once you have most of the bronze cards in the game and start getting duplicates. With the game’s generous economy, it will not take as long as it may seem at the first glance.

Meteorite Powder is obtained by spending RP, milling spare premium cards, or buying it with real money from the in-game shop. There is also a small chance of acquiring 50-powder drops by linking your GoG account to your Twitch account and watching Gwent: The Witcher Card Game streams that have enabled in-game drops.

Meteorite powder can be used for different cosmetic upgrades in Gwent. One way to use it is turning your standard cards into premium, that is animated, ones. It costs 100, 200, 300, and 400 Meteorite Powder to transmute standard copies into premium copies for Common, Rare, Epic, and Legendary cards respectively. Another use for it is buying cosmetic bundles from the store, although these are quite limited and most will require real money.

After reading this lesson, be sure to check out future lessons to see where best to spend your hard earned RP and in-game resources.