A Quick Overview of Gwent

In this lesson, we'll overview the basics of the game and the mechanics you need to keep in mind when you take your first steps at the Gwent table. Do not let yourself be intimidated: Gwent is very different from the other CCGs you may know, and there are many small intricacies to master, but the basic game mechanics can be easily understood.

Gwent features a unique round structure:

Round Commitment and Passing

Deciding when to pass in a round and when to push is one of the most important choices you need to make in Gwent – especially because of Gwent's second unique mechanic: its card draw system.

The player starts with 10 cards and does not draw any further cards until they complete a round, at which point they will draw another 3 until the hand limit of 10 cards is reached. Overdrawn cards between rounds are converted into additional mulligans on top of the standard number of mulligans: In the first round, the player who goes first gets 3 mulligans, the other one 2. The number of mulligans in subsequent rounds are 2 for both players.

Due to the limited draws each of your cards is extremely valuable and committing too many (good) cards in a round can easily cost you the game since the opponent might outclass you with the quality of their hand in the final, decisive round – or they might just be able to bring more cards than you altogether!

Playing a card does not cost you any additional resources; during your turn, you can play any card you want.

Because different cards are worth different amounts of points and since every card has their own individual effect, the game is all about reacting to the enemy's strategy appropriately. To decide if a card should be committed early on or rather kept for a later round is a hard but fun choice and an inherent part of Gwent’s core gameplay.

Building a deck in Gwent is nontraditional as well, as Gwent uses a resource called provisions. Each card is worth a certain number of provisions. To build a deck, you only have a limited pool of provisions available, that is 150 provisions plus the provisions provided by your chosen leader ability (see below).

Remember that deckbuilding is not about cramming all the most powerful cards into your deck, but it is about mixing the right high- and low provision cards together, so their combined abilities synergize and generate the highest amount of points possible.

There are six factions: Monsters, Nilfgaard, Northern Realms, Scoia’tael, Skellige and Syndicate, each with their own set of cards and archetypes. There is also a pool of Neutral cards that can be played in any faction.

Each faction also has unique leader abilities, and you have to choose one for each deck that you build. Leader abilities can be triggered during your turn and either represent singular, powerful moves that can provide you with additional points in an important moment or, alternatively, support your deck's strategy every few turns on a continuous basis. As mentioned above, the leader ability you choose determines the maximum amount of provisions that you can use for your deck.

While you can obtain cards by buying card kegs in the in-game shop or by individually crafting them with so called “scraps”, you will earn a lot of them already by merely playing the game. Login rewards, daily quests, seasonal reward trees and rank-ups on ladder provide a steady income of cards, kegs and resources to work on your collection – one step at a time!

In comparison to other games, Gwent is very generous with its distribution of rewards, allowing you to aim for a high level of competitiveness without being forced to throw all your money at the screen. While you get 5 cards per card keg, you can choose your 5th one out of 3 options which helps a lot to avoid unnecessary duplicates and build your collection faster.

If you want to support the developers, you can do so by buying collectibles like card backs, game boards, leader skins, avatars or animated premium card arts, which are purely cosmetic in nature and have no effect on the game itself. 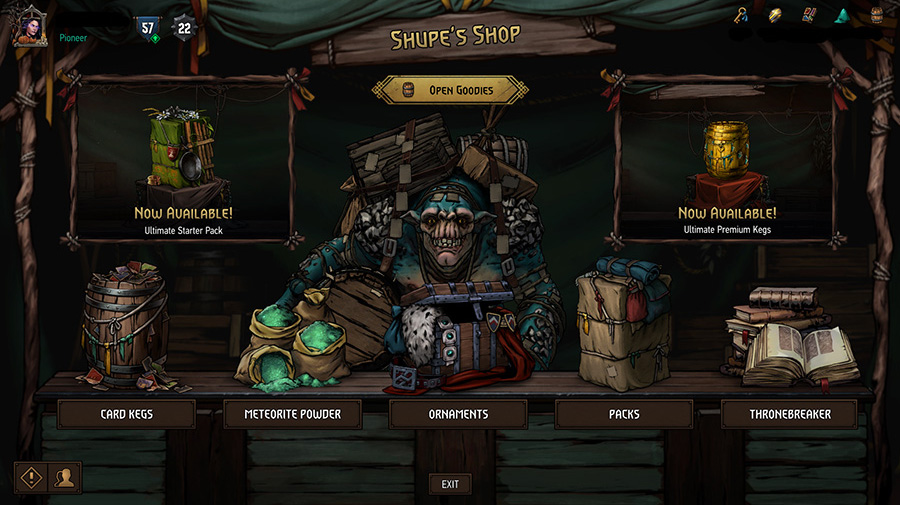 You can purchase card kegs and cosmetic items in Gwent's in-game shop.

The most important thing to take away from this lesson is that while the gameplay of Gwent might fundamentally differ from other CCGs thanks to its round and card draw system, it is rewarding, intuitive and exciting to play as well as incredibly fun to master!

In the next lesson we explore how you need to change your mindset when playing Gwent in comparison to other CCGs, so stay tuned!

Each lesson will feature a small quiz helping you to take away the most important points of the lesson!