The Subtleties of Gwent's Game and Card Mechanics

Greetings, fellow Gwenches and Gwentlemen! I am Easha Dustfeather, member of the Lodge of Sorceresses, which supported me while writing this guide once again. It is meant for new and more experienced players alike and covers game mechanics and card interactions which might not be obvious at first glance or are not mentioned at all.

There is a general rule in which all effects on the board are resolved from Melee to Ranged row, from left to right. This is relevant for weather effects as well: If both rows are under weather, units in the Melee row are damaged first, followed by the Ranged row. Usually this does not affect the game’s flow much, but to give an example where this rule really matters:

Assume that your opponent played the artifact Black Blood (which destroys the next unit that receives a boost) during the last turn. You have Dagur Two Blades in your Melee row and An Craite Greatsword in your Ranged row (I). Now you use Mastercrafted Spear's Order ability to damage an enemy unit in your opponent’s Ranged row (II). Which unit would get destroyed?

The answer is Dagur.

According to the aforementioned rule, Dagur's effect is resolved first, so he boosts himself earlier than An Craite Greatsword and thus gets destroyed by Black Blood (III). 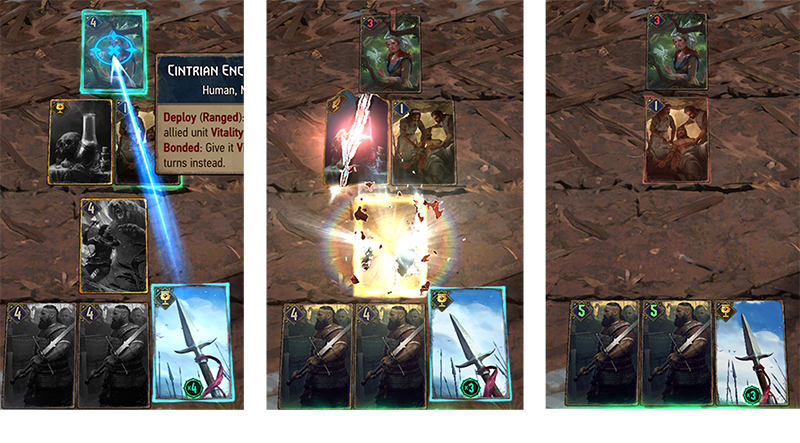 Deploy effects are resolved before the unit is placed on the board. If you play Cyclops next to a Drowner and want to use it for Cyclops's effect, Drowner's Thrive effect will not be triggered. You will deal damage with Cyclops by destroying that Drowner; afterwards, all the remaining Thrive units smaller than Cyclops will get their one-point boost.

You do not have to play a card each turn. If playing a card would put you at a disadvantage, you can Discard it directly from your hand and put it into your graveyard. To do so, choose a card in your hand and left-click the graveyard. However, this does not count as a Discard for the purposes of card mechanics. A Tuirseach Skirmisher Discarded that way will not reappear on the board

Even if this is not mentioned in the description, a unit with Resilience will carry over all other statuses into the next round. All Armour, however, is lost.

Locked units are unlocked as soon as they enter the graveyard. A unit is also unlocked if it is shuffled back into the deck from the board.

Activating an Order Forces You to Play a Card

You cannot activate Orders (including leader abilities) and pass without playing a card. As soon as you use at least one Order ability, you have to play a card before passing. Make sure to use Order effects like Tactical Advantage in your current turn if you intend to pass in your next one.

Turn-end effects, like Mahakam Defender, trigger once more after a player has passed. If both pass, the result screen is already shown, but in the background you can still see the effects being resolved on the side of the player who passed last.

When the timer runs out and you have not played a card, a random card from your hand will be moved to your graveyard. This is considered a manual Discard as described earlier.

If you are in the process of choosing a target for an effect while the timer is running out, the target will be decided randomly among all valid options. You can even end up using Lacerate on your own row. Targeted leader abilities fall within that rule as well. This also applies to other decisions. Using Aguara: True Form as an example, if you do not decide which of the three Created cards to play, one will be chosen randomly, as will its targets.

A card with this effect will change into an exact base copy of the card identified in the transform effect. If the identified card is a unit, all existing statuses, boosts, and damage are lost. Prominent examples are Botchling and the Deadeye Ambush ability.

Whenever-a-unit-is-damaged-effects trigger on any instance of damage to a unit, but notably do not trigger if the damage is lethal. Thus, if Drummond Shieldmaiden is killed with one hit it will not Summon a copy, and Blueboy Lugos won’t deal another two damage to an enemy if it is killed by the instance of damage.

The check regarding the “unique primary category” is not Scoia’tael-specific. When you look at it in detail, there are actually two checks happening to determine if the Harmony effect will trigger:

Harmony: Boost self by 1 or the specified amount whenever you play a Scoia’tael unit…

This is the first check whether the card you just played is part of the Scoia’tael faction or not.

…on your side whose primary category is unique among all of your units .

The second check about the category being “unique” does not take the faction of the cards on your side of the board into account like shown in the following example:

Thank you to DaSchnad for providing the footage.

In this instance, the Dryad Fledgling's and Sirssa's Harmony effects are not triggered by Milva, because the opponent’s Emissary with the Human tag was already present on the board. When Emissary was first played by the opponent, the Harmony cards were not boosted either, as the Spy was neither a Scoia’tael unit, nor played by the Harmony player.

Numbers in Gwent are never displayed as rational numbers – they are only displayed as integers, which is why rounding becomes necessary. Numbers in Gwent are always rounded up for the sake of boost and damage effects such as Ulfhedinn. That is, if Ulfhedinn targets a card with an odd number of power, it will deal the same amount of damage as if it was targeting the next higher even number; for example, it does six damage to both 11- and 12-power targets.

Effects that set a unit’s power to a new number are neither considered damage if that new number is lower, nor boost if it is higher. Setting the power of a unit to zero will move it to the graveyard.

A unit will always appear at the rightmost side of the row it is Summoned to unless stated otherwise.

Using Birna Bran as first card with a full hand will only give one card because of the hand limit. The second card is manually Discarded at once. You still have to Discard two cards afterwards so you practically lose a card and thus probably the game as well.

All Traps can be flipped over manually. Incinerating Trap and Crushing Trap will have a weaker effect, as stated at the card, but even Traps which do not have such a Zeal effect can be flipped like this, although their effects will not be triggered. Even so, if your opponent did not play a special card, you can still left-click your Serpent Trap and turn it over so you have a target for Deadeye Ambush or another boost on Elven Scout.

Not Choosing a Target by Pressing "Confirm Choice"

If you do not want to choose a target after playing cards which ask to make a choice, you can just click the "Confirm Choice" button to do so, if available. This option is available on cards like Derran and Traheaern var Vdyffir. 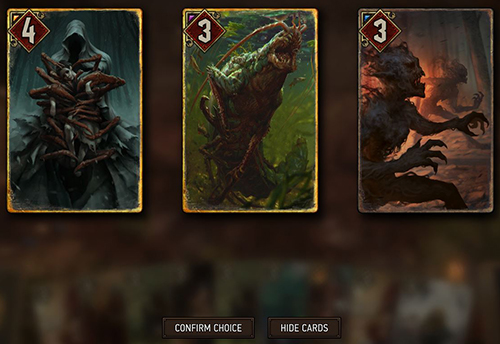 Aelirenn and a Full Melee Row

Aelirenn's effect will be delayed until there is free space on the Melee row for her to occupy, as long as the condition of five Elves on the board is still met.

“Destroy the highest unit” on Villentretenmerth and Curse of Corruption

If there is more than one legitimate target for the effect, the tie is resolved randomly. Note that this means that you can even end up killing your own unit.

If a Berserk unit is set to 1 power by Shilard’s ability, the Berserk ability will not be triggered while that unit is still in the hand of its owner. However, as soon as the Berserk unit hits the board, the condition of Berserk is fulfilled and thus the ability goes off instantly.

Svalblod Ravager enabling its own Bloodthirst

Ravager’s Deploy ability can be used to enable its Bloodthirst effect. The 2 damage are dealt before the board state is checked for Bloodthirst.

Using Vivienne's effect on tokens which have a provision cost of zero will destroy these tokens. This can be used against the 11 power/0 provision token Spawned by Arnjolf the Patricide for a 14-point swing.

Some of the mechanics mentioned in the article cost me a game because I assumed they would work differently or I did not even know about them at all. Manually flipping Traps was something I discovered recently, and while asking around in the Lodge of Sorceresses even some veterans in Pro Rank did not know about it. I hope this article will prevent the mistakes I made in your future matches.