After going through the tutorial and playing with the starter decks, one of the most fun parts of the game begins: You are now ready to begin acquiring new cards and building new decks to explore and play! Read on to learn about the very basics of deckbuilding in Gwent and set yourself up for the subsequent guides and lessons about the various features involved with building your collection and decks.

The first order of business is to establish the rules for creating a deck.

Choose a faction and leader ability

The first decision you must make is the faction which you wish to play. There are 6 factions in the game from which to choose. Don’t feel pressured about deciding a faction now, as we are recommending that you explore what each has to offer and you will be able to play them all before long.

Within each faction, there are six leader abilities to choose from. These are all unique abilities you may use in addition to your cards each game. With a faction and leader ability selected, you are ready to start adding cards.

When building a deck, you first choose a faction and then a leader ability.

Adding cards to your deck

In Gwent, a deck can only consist of the chosen faction’s cards as well as cards from the neutral pool. You can identify a card’s faction by the background color of its power in the top-left corner.

Each deck must contain a minimum of 25 cards. It is highly recommended to always use exactly 25 cards in the deck, as this improves card-drawing consistency. Specifically, your deck must have at least 13 units, though you can of course have more.

Cards are divided by colors, which can be either gold or bronze. A card's color is shown as its frame.

Note that premium (that is, animated) versions of cards do not count as separate copies.

This is not the only limitation on your deck, however, as Gwent possesses a unique balancing system known as provisions. A card’s provision cost can be found in its bottom-right corner. Each deck has 150 provisions and receives additional provisions from the chosen leader ability. The sum of provisions among all cards in the deck must be lower than 150 plus the value provided by our leader ability. 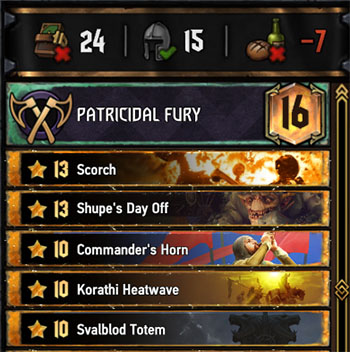 Once you begin playing (and winning) games, you will surely want to expand your collection to acquire new and powerful cards. Later lessons in this course as well as the Aretuza Deckbuilding course will cover this aspect in more detail, but we can get the basics out of the way here.

You should look to begin acquiring cards that can go into as many decks as possible to get the best value you can from the start. Some examples of these may be found in our Starter Decks and Top Cards to Craft guides, but, in general, neutral cards can be slightly prioritized, as they can go in any deck and do not make you commit to a certain faction yet.

Once you are ready to begin adding cards to the deck, it is a good idea to build with a certain strategy in mind. Utilize the cards in your possession to try to build a coherent winning game plan. The most powerful cards in our deck are the gold cards, with bronzes supplementing them. Take advantage of the best cards available to you and start building around them.

For example, the Monsters starter deck has Ozzrel, who can Consume a unit from the graveyard and boost itself by the Consumed unit's base power. This may incentivize you to include high-base power units and fill out the deck with cards that have the Thrive mechanic to benefit from playing these big units. Be creative and try out the card combinations available to you.

Last but not least, do not be afraid to use decks built by others. There are many great deck builders around that establish the most popular decks each month and it is a solid opportunity to learn from them. You can find popular decks in a variety of places, but the Aretuza Meta Snapshot will contain a collection of meta decks each month.