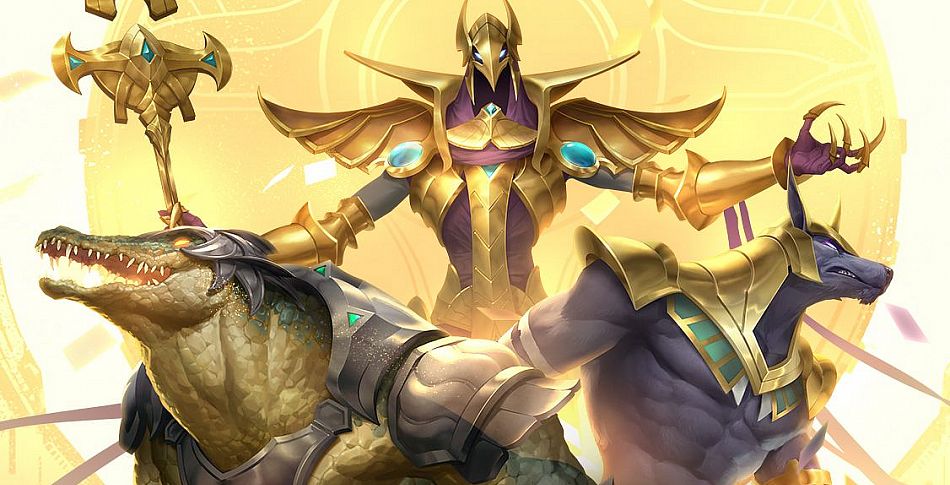 Shurima opens the borders of its scorching desert full of the ruins of dead empires in the newest expansion for Legends of Runeterra: Empires of the Ascended. Here we take a closer look at the revealed cards so far and attempt to measure their strength, starting with Renekton. 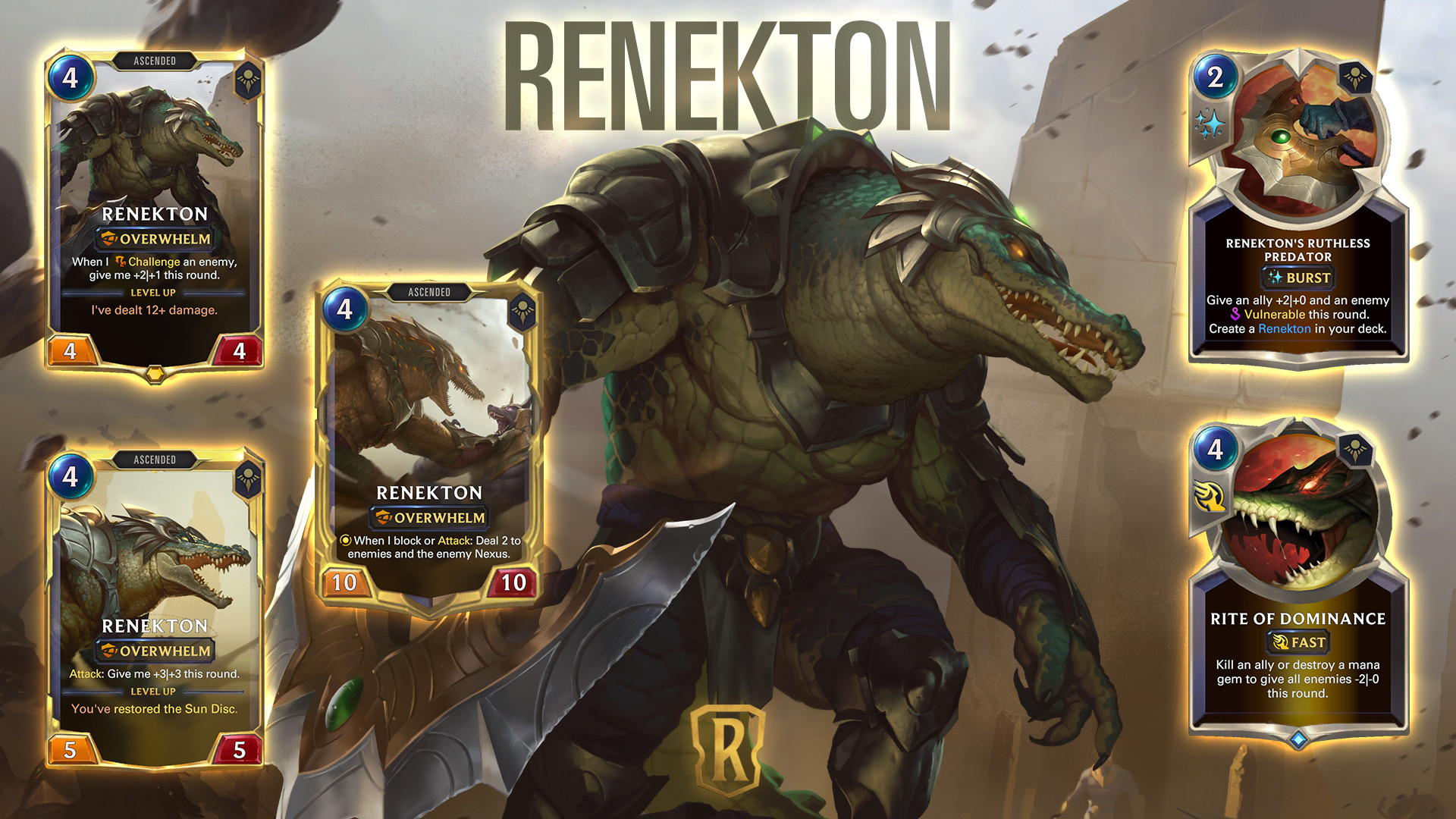 Level 3 Champion! But let us not focus on that just yet. Coming down on turn 4, Renekton has respectable stats for his cost, able to kill most 4-drop followers. If able to attack with Challenger, (or Vulnerable) he also trades favorably into most champions,

Nocturne being notable exceptions. His level up can seem hard to achieve, although two empowered attacks are enough to flip him, or perhaps using a damage buff on the subsequent defense turn, or even making use of the myriad of Strike effects that can be found in Demacia. Once flipped, Renekton becomes an 8/8 on every attack, able to better use his Overwhelm keyword, and looking like he would find a home in an Overwhelm archetype.

Now finally, his level 3. It is a new mechanic, and since it is tied to other cards is quite hard to evaluate. For now, I would estimate that the effect is absolutely devastating, however the cost of having to include Buried Sun Disc or Ascended's Rise in the deck may not work well with Renekton's aggressive tendencies. 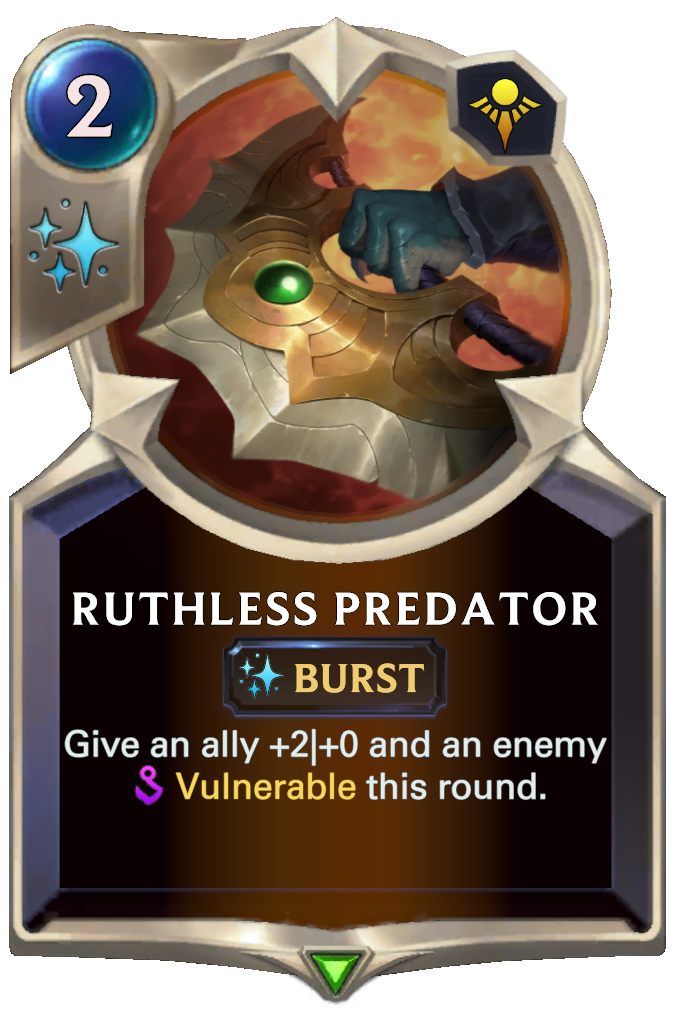 A decent card on the surface that could have some good synergy with high health, low attack units, and provides some amount of removal much like

Sonic Wave however, it isn't likely to see much play outside of Renekton decks. 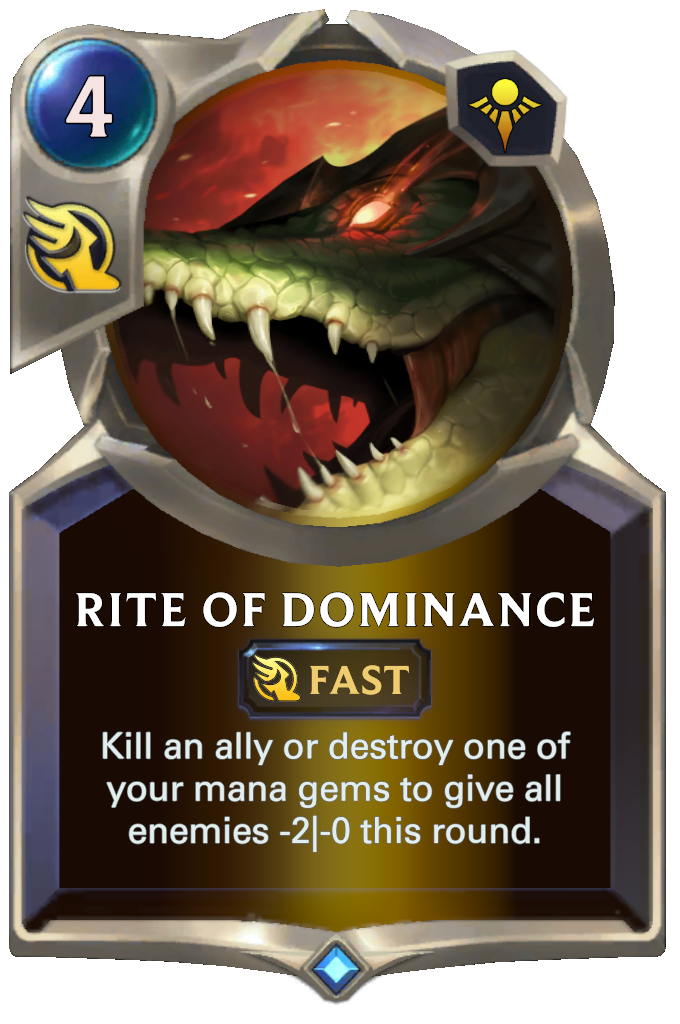 A costly effect which could be alleviated with Shadow Isles, the traditional Last Breath region. Losing a mana gem is extremely costly and seems like a desperate move unless we are aiming to finish the game on that turn. Rite of Dominance will not be a Shuriman staple, but will see play in Fearsome aggro where a board-wide -2 attack debuff is going to be clutch to full swing for lethal damage. 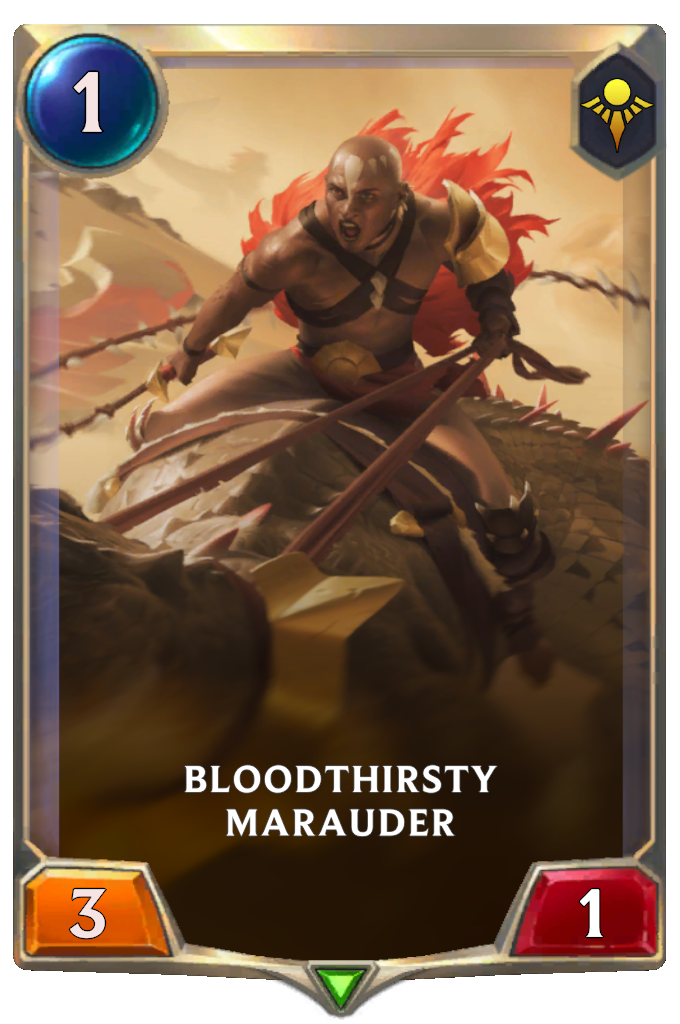 Weak compared to most other aggressive 1-drops.

Legion Saboteur performs better as the total damage is equivalent yet one damage is guaranteed to go through even if blocked. Its one upside it that Marauder trades evenly into

Solari Soldier on the turn it is played, but is otherwise simply average, leaning mediocre. 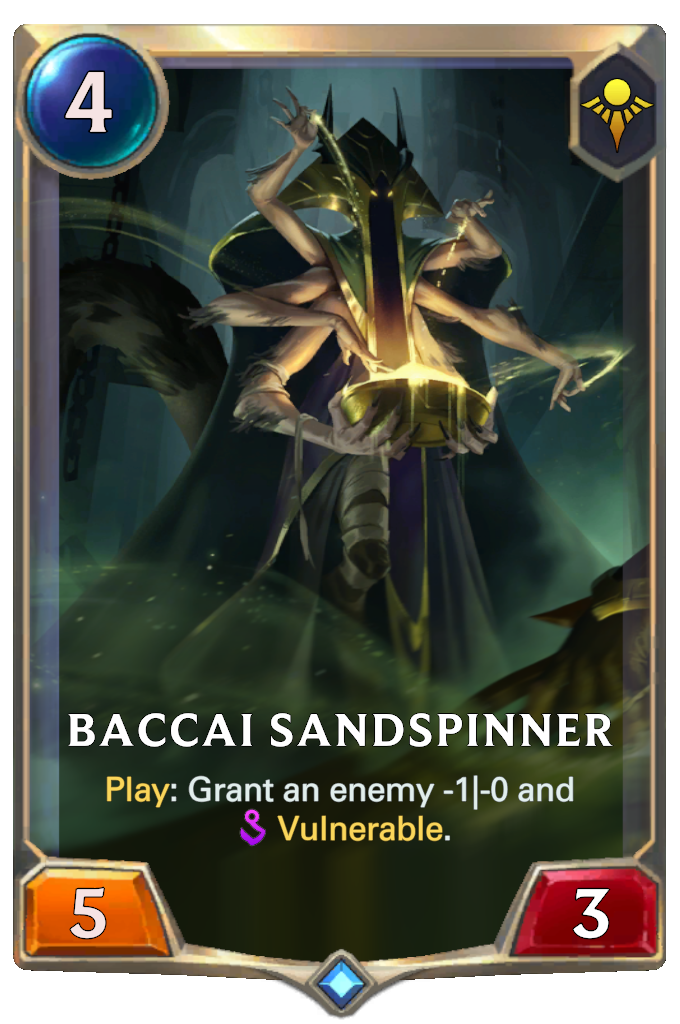 Sandspinner sports a well made

Nocturne cosplay. Sadly for them it is just that, a mere imitation. Their statline is weak, and while the Vulnerable effect is welcome, there are easier ways to benefit from it without having to play a wonky bundle of stats. Could maybe see play as a tech option for more removal or in Fearsome, but will not be a staple of the region. 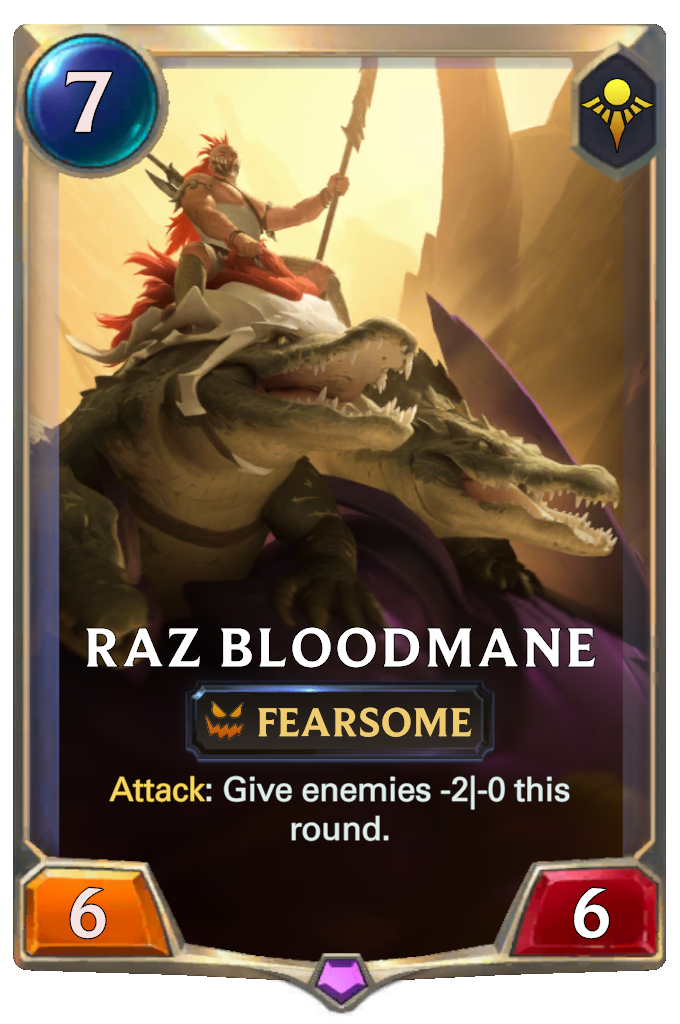 Raz fits the mould already constructed by Rite of Dominance, and double downs on it. An obvious choice for any Fearsome decks to serve as a turn 7 finisher much like

They Who Endure. Raz's problem compared to the Freljord finisher is that his effectiveness is contingent on already having a board full of fearsome to make full use of his Attack effect and overall has many more counters than

They Who Endure who can generally fight through any units. Just like Rite of Dominance, Raz Bloodmane could see play in a Fearsome deck but will not become a staple, and is in fact less likely to be played than Rite of Dominance because of its less flexible nature. 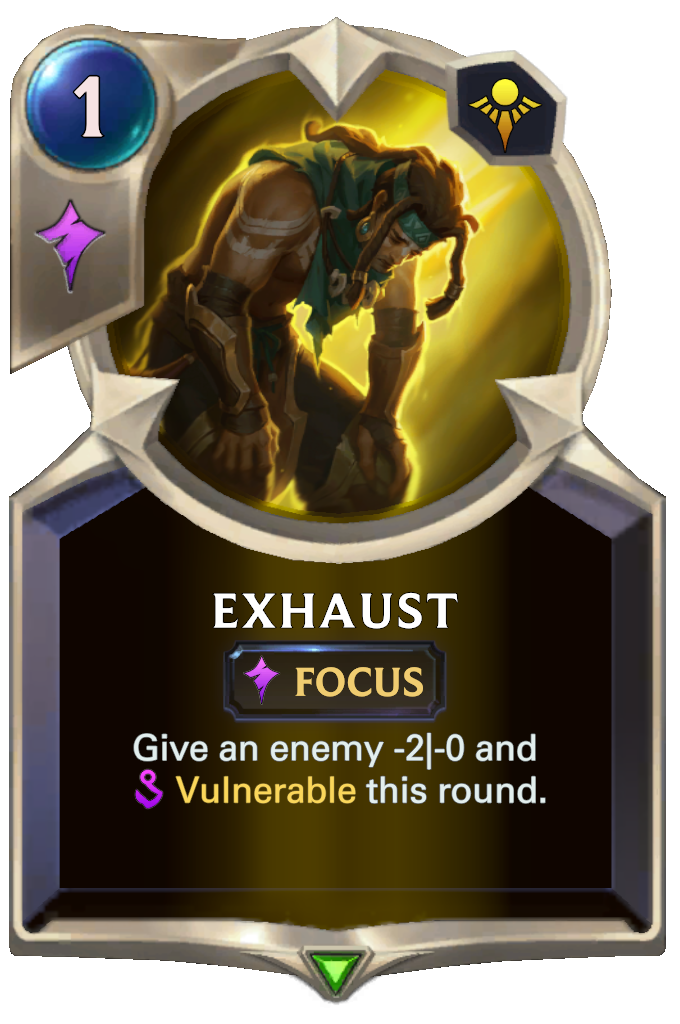 Exhaust blows Ruthless Predator out of the water simply because reducing damage taken on a trade is almost always better than giving ourselves more damage. Add to it the more advantageous mana cost and it is easy to see which card is the better option, especially when the less broadly useful casting speed will rarely be an issue. Instant staple. 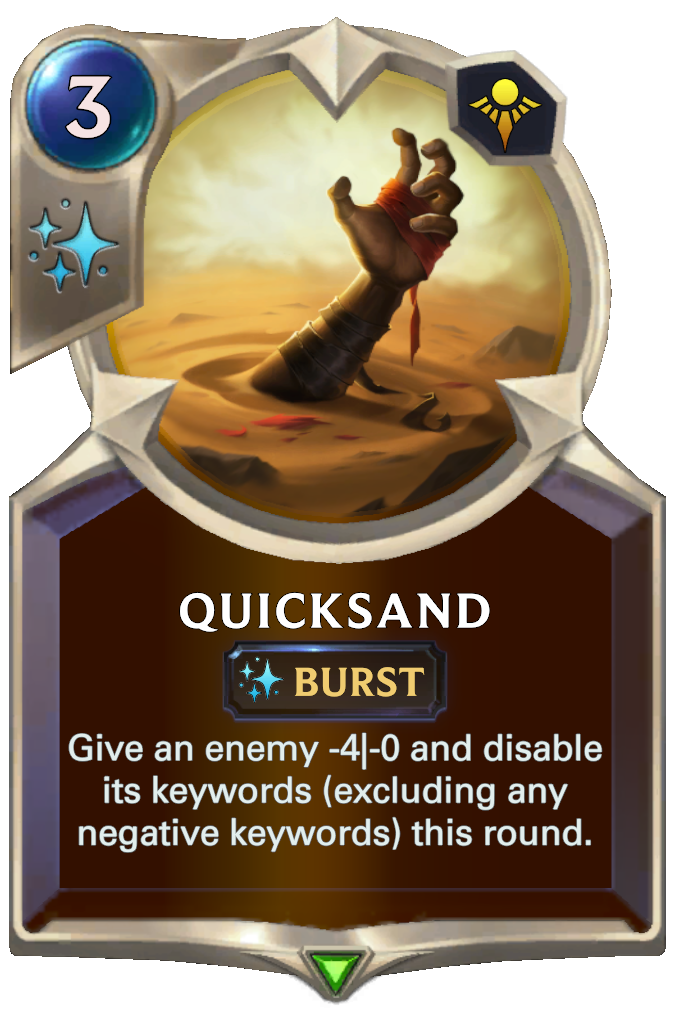 Hush. While it is not as broadly effective as the Targonian silence, this is the next best thing and will certainly see play in a myriad of archetypes. 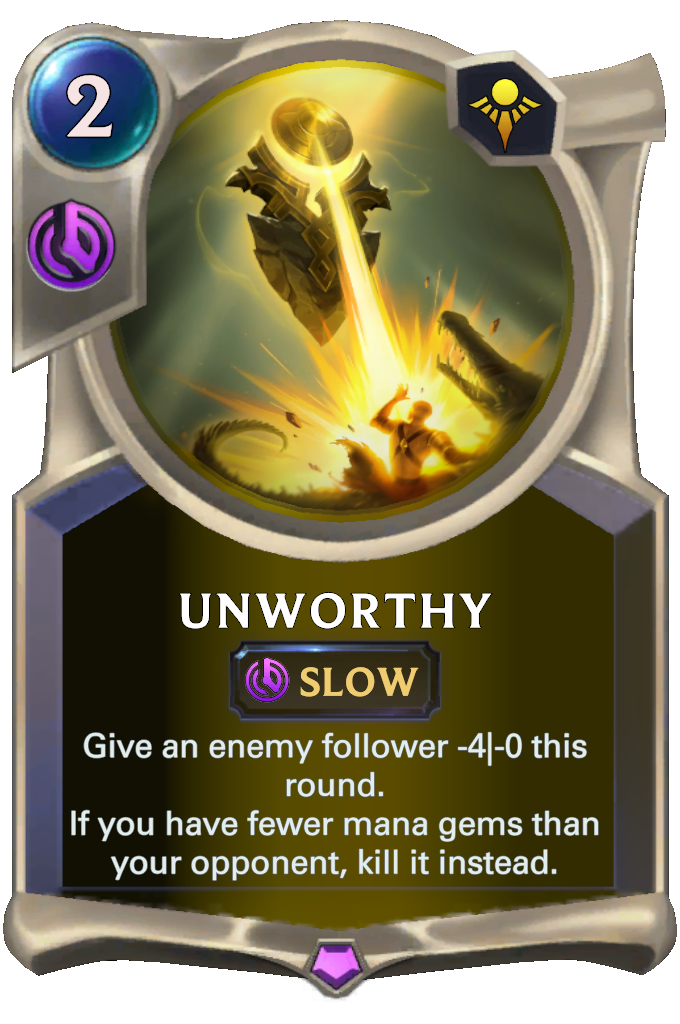 Its effectiveness is contingent on the viability of other mana manipulation effects. As is, it seems narrow in use and the Slow speed is not doing it any favours. Perhaps the next batch of reveals will elevate its status. 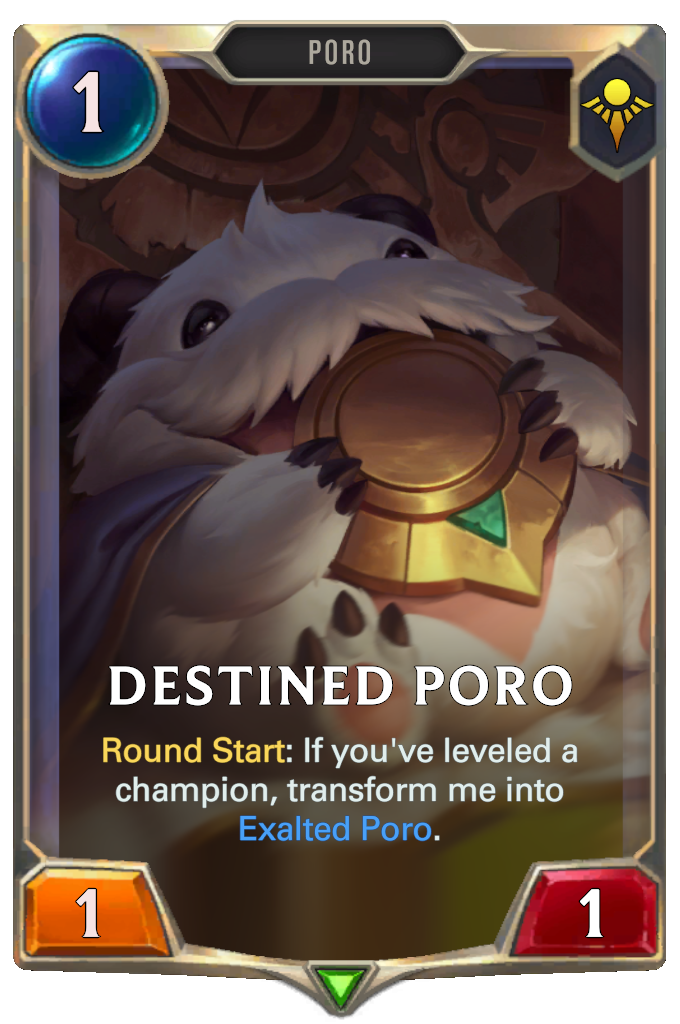 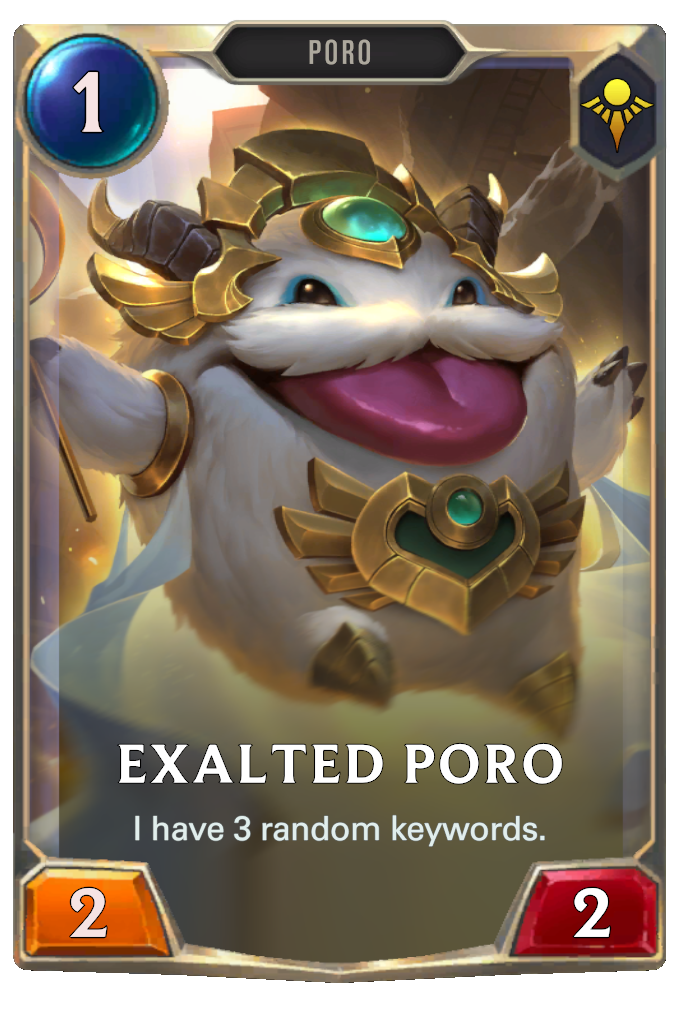 Destined Poro is nothing particular at first glance, despite the fact that the fluffball is literally leveling up. Perhaps an easy to flip early game champion will be the catalyst for Destined Poro to reach exaltation. Still, Destined Poro seems like a weak option even with the benefit of an early champion flip, as many keywords could end up not working well on a low stats follower. 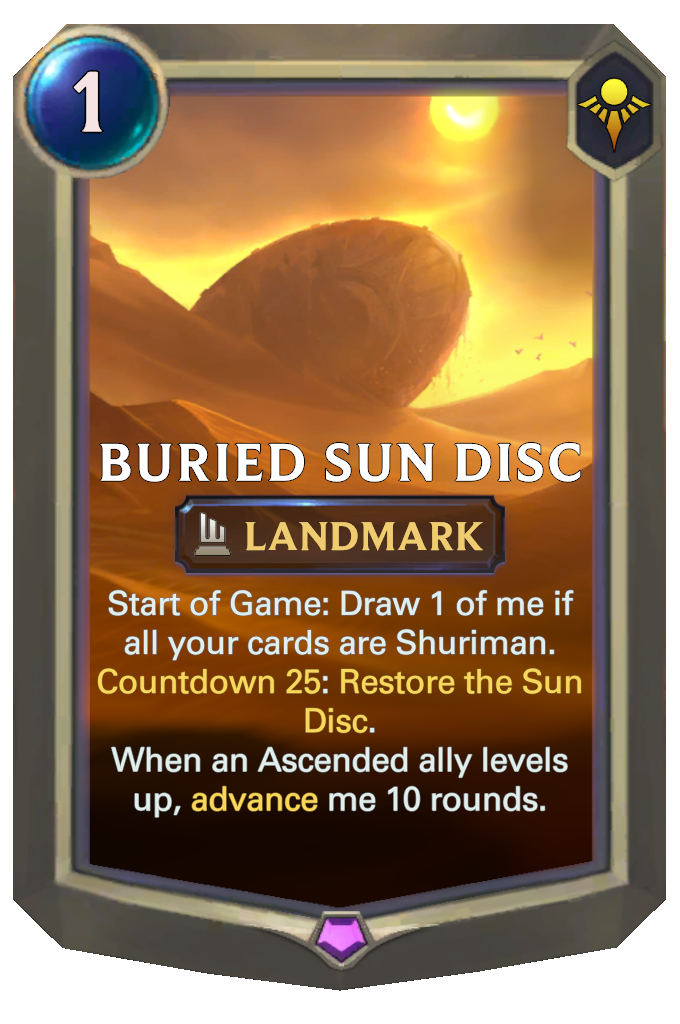 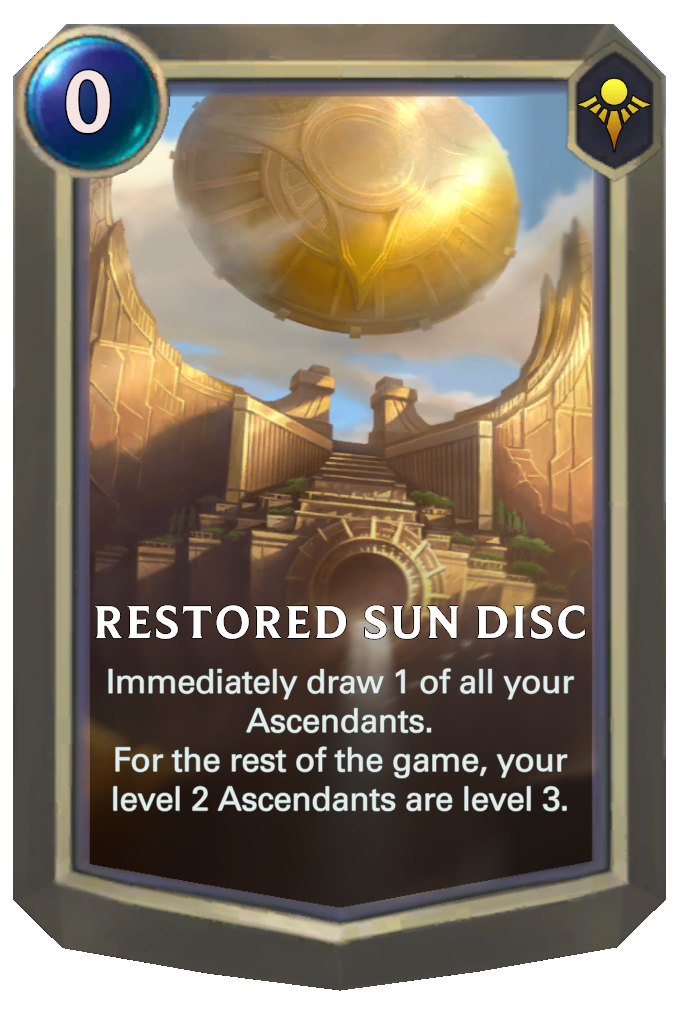 ASCEND TO GODHOOD! First off, the card has a huge cost. Not only are we essentially forced to run mono-Shurima, we must also include several yet to be revealed Advance cards which will help us restore the Disc in a timely fashion. If Renekton is anything to go by, the payoff is definitely there and the promise of power massive. We will have to see if the cost is worth it, and I believe it will be, even with the presence of Landmark removal. This is the enabler for a whole archetype, better not sleep on it. 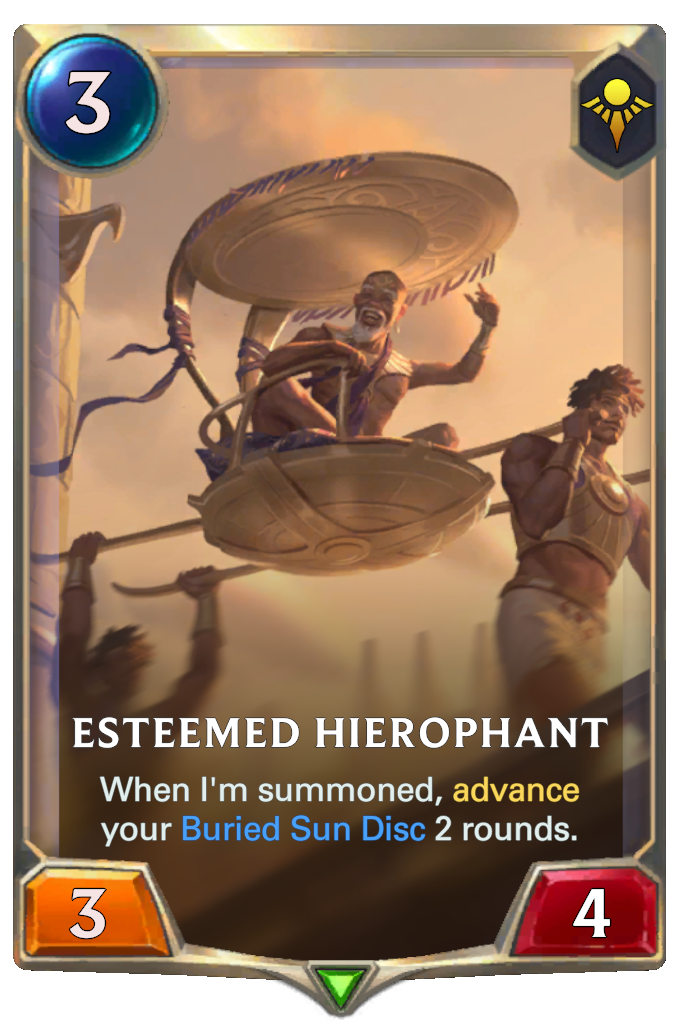 Loyal Badgerbear. Not bad, but the furry companion rarely saw play outside of being a token from

Grizzled Ranger. Esteemed Hierophant should be a decent turn 3 in a deck built around the Sun Disc, though it is nothing special on its own. It may see play if no better alternative are found to advance the Sun Disc faster. 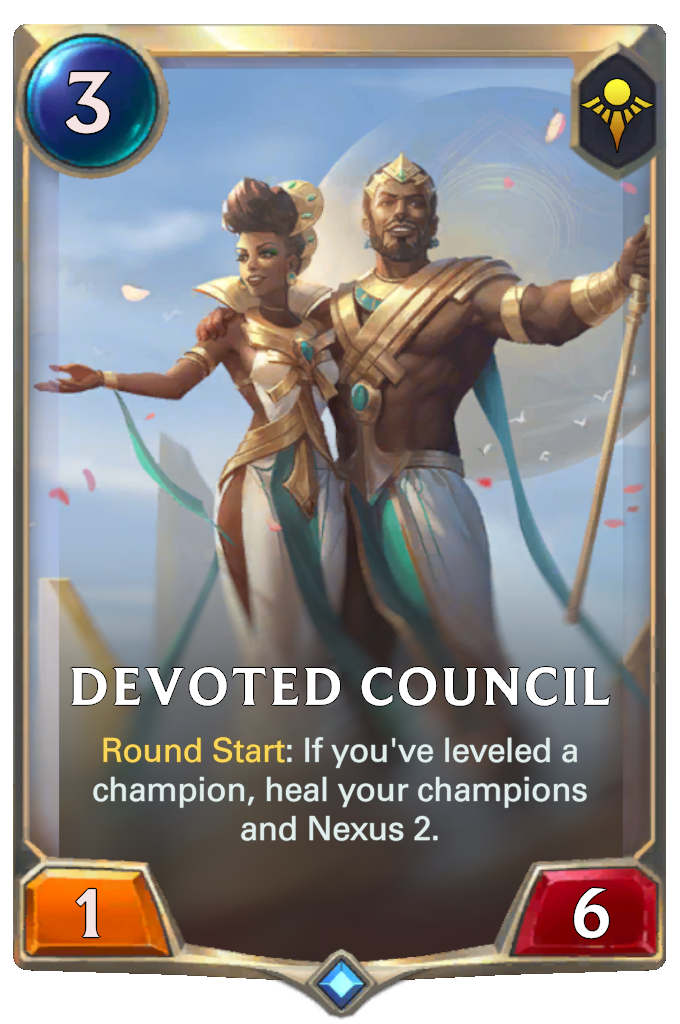 In the same vein as Destined Poro, Devoted Council is simply weak before a champion has flipped. Its attack value may as well be inexistant, and while it can wall off an attack or two, its true value lies in the provided healing. Therefore, we must see more of the new champions, and if perhaps one benefits from an early enough level up so as to make Devoted Council an attractive option. Devoted Council is also oddly close to

Broadbacked Protector, and could be a decent option alongside 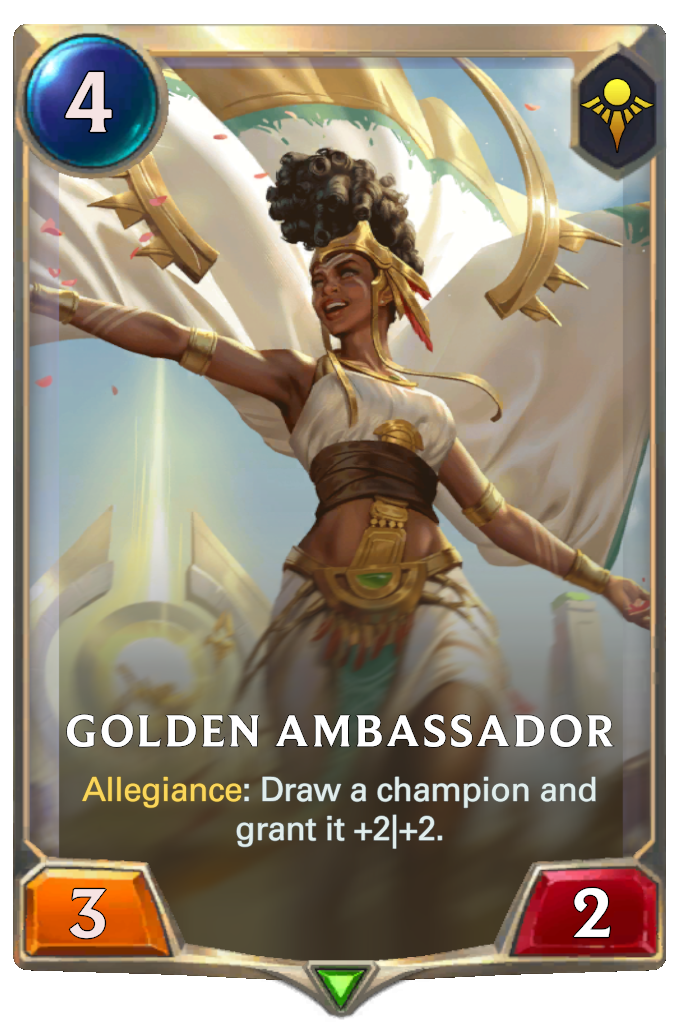 Out of all Allegiance cards, Golden Ambassador has to be the most valuable one. Unlike

Written in Stars, Golden Ambassador can directly be put in your deck and comes with a body which makes a big difference tempo wise. While it may not be a staple because of the cost of Allegiance, I see nothing but a bright future for the new member of the Allegiance family. 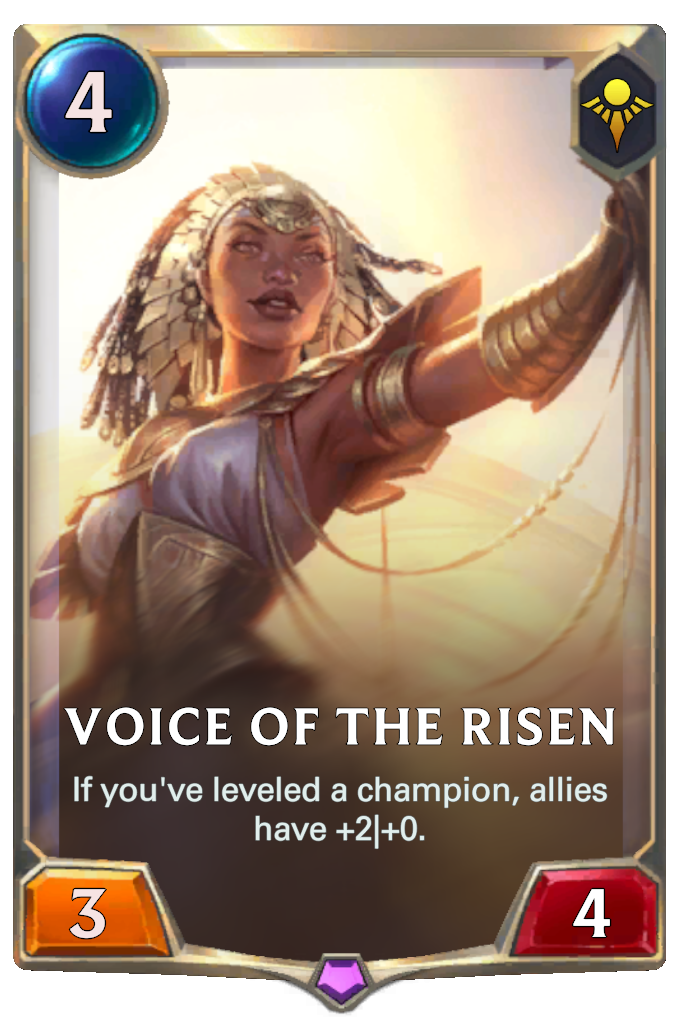 Voice of the Risen

Yet another card which relies on a champion flip. For comparison,

Vision is a powerful effect as well but mostly because of the tempo and Voice of the Risen does not have that same power. The higher mana cost and slow speed makes it more clunky, and the champion level up requirement is another hurdle to get through. I could see this card being played in a swarm aggro deck, or centered around enabling smaller elusive units, but little else. 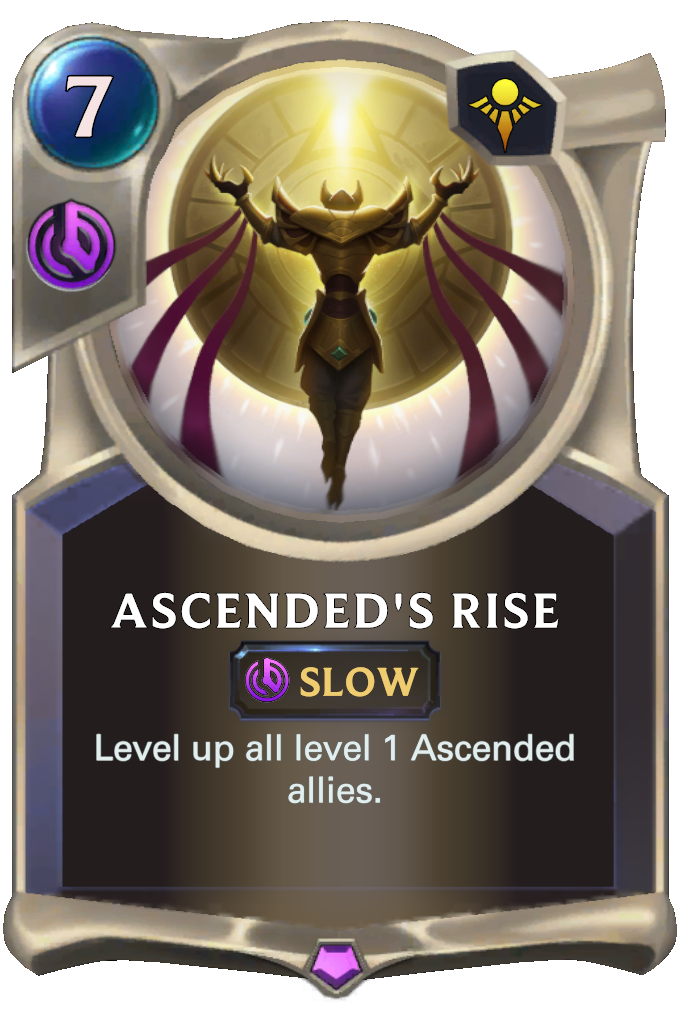 Praise the sun! Ascended's Rise is a powerful enabler but its greed may just be its downfall. Other expensive slow spells have been effective in the past, mostly removal-based like

Icequake or game-winning effects such as

Feel the Rush. The trend for these types of spells is that they see play if they have an immediate impact on the board that is not contingent on any other condition. While

Mind Meld has seen play recently, it is only in decks that specifically can make good use out of it, and not a broadly powerful option. Much the same can be said of Ascended's Rise, and worse, it will only have an immediate impact on the board if and when Ascended champions are present on the board, which may not be an easy condition to meet and execute. However when it works, if Renekton is anything to go by, the payoff will be divine. A good Timmy card as is, but little else. 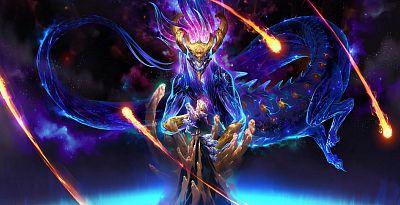 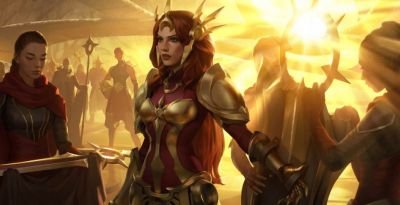 Legends of Runeterra Meta Snapshot #1: Call of the Mountain 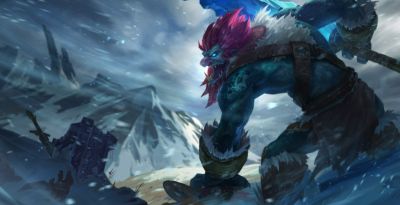