In this article, JMJWilson returns to analyze the long-term impacts that come along with the massive changes introduced by Patch 3.1. This discussion will be rooted mainly in theory, discussing concepts at a high level rather than delving into the individual adjustments.

Patch 3.1, to which I will henceforth refer as the Bronze Update, made sweeping changes to the game in terms of both game balance and design decisions. This piece will focus mostly on the overarching design changes featured in the patch, while also highlighting the effects of this patch on both deck-building and gameplay.

The Bronze Update sought to accomplish several tasks at once. While all of these changes are important to the game moving forward, I will focus on some of the key ones:

The first big change was an overall reduction in both the frequency and amount of damage effects available as Deploy abilities on units. Special cards (and in some cases artifacts) are still able to deal large amounts of damage, but the number of units with high levels of damage have been reduced, especially when these are bronzes. Units that deal 4 points of damage or higher in particular are the ones that have been reduced.

The second change that I will address is the widespread power increase to bronzes in every faction. The patch featured 256 balance changes, of which the majority were bronze cards.

The impact of increasing the power level of bronzes is massive. Small changes to the value of cards with low expected value (EV) is mathematically more impactful when compared to similar changes to cards with a high EV. For example, if a 4-value card is buffed to 6 overall value, this is 1.5 times higher than its original value. On the contrary, buffing a card from 7 value to 9 value increases its value by a factor of 1.3. There are other factors at play which result in power increases to high-value cards being impactful as well, but at a fundamental level, buffs to low-value cards make for extremely efficient usage of the provisions available in a deck.

As explained above, buffs to low-provision cards are highly impactful to the game. This type of buff (1-2 points added to the base power of the card) is exponentially more influential for bronze engines.

Engine: A card that generates points over time, rather than getting all of its value immediately.

Every point added to the base power of an engine not only increases its point floor, i.e. the minimum number of points achievable, it also raises its “break point.” The engine is more difficult to remove and, thus, more expensive cards are needed from the opponent to remove it.

As such, it is often a good idea to include a reasonable amount of efficient bronze engines in one’s deck after the Bronze Update. At the same time, it is important not to make the bronze core too heavy on engines. We must play cards only one at a time and therefore, multiple bronze engines begin to compete with each other for value. Engines are cards we of course want to develop early in the round, yet every bronze engine we play delays the next engine by a turn and decreases the returns. This makes finding engines that both synergize with each other and provide solid value on their own one of the most important tasks when developing the bronze core of a deck. The classic example is the combination of Svalblod Priest and Heymaey Protector in Skellige, which are able to generate 1 point per turn each when paired together and apply a great deal of pressure to the opponent in return for low commitment to the round.

The engine pairing of Svalblod Priest and Heymaey Protector. With a unit positioned between these two, the player generates 2 points per turn while only committing a total of 9 provisions.

As stated above, the changes of the patch affected low-provision cards the most, especially those in the 4- and 5-provision cost range. With these cards now often achieving great value when their conditions are met (typically 6-7 or even 8 points), it is essential to make them feature prominently in most decks. Playing more low-cost cards to create free provisions and play a greater number of high-cost cards is known as “polarizing” the deck. Polarizing the provision curve to include many 4- and 5-provision and few 6-7 provision units has been a cornerstone of deck-building in all of Homecoming. Now, it is more rewarding than ever due to the payoff one receives for including them in a deck. The downside is minimal with these new high-value bronzes. As a rule of thumb, decks typically will contain around 13-15 cards that cost either 4 or 5 provisions, with 8-10 of these costing 4 provisions. 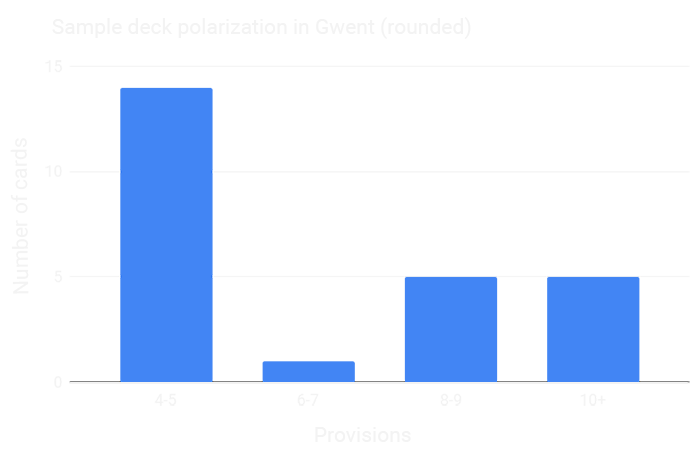 Sample breakdown of a deck that takes advantage of a high number of low-cost bronzes to utilize more high-cost and powerful cards. There is a distinct lack of cards in the 6-7 provision range and 10 cards that are 8 provisions or higher.

As with any rules, exceptions exist all over the place. Some decks do not want to run many bronze engines due to other strengths offered by other bronze cards. This is the case especially for Syndicate decks, which are able to extend the removal range of normal bronzes with the inclusion of Bounty cards. The only thing more premium than a bronze engine at the moment is a bronze removal card, which allows Syndicate decks to come out ahead of a trade with bronze engines, although not in terms of immediate tempo. Some decks also do not seek to polarize their provisions to a large extent. Good examples are decks that run Portal, and thus cannot play as many 4-provision cards as other decks, or combo-heavy decks that make strong usage of cards in the medium provision range (6-7). Therefore, it is important to be mindful of opportunities to stray from the standard guidelines mentioned above and gain an advantage.

In addition to impacting deck-building, the Bronze Update will shape the way that games play out at a fundamental level. At its core, Gwent is a game about resource management. The game pits two players against each other and tasks them with determining the most efficient way to distribute their cards across three rounds. As such, a natural gameplay arc has developed. The final and decisive round, Round 3, receives the greatest priority and typically sees the greatest commitment of resources on a per-card basis. Both players will often seek to play Round 1 with as minimal commitment as necessary in order to achieve their own goals for the matchup. This pattern is natural and occurs in most players’ games even if they do not consciously realize it. There are of course many variables that determine how each game plays out and many do not follow this play pattern, but it is generally a useful concept to keep in mind when analyzing how games play out.

Resource Management: Getting the Most Out of Round 1

Following the theme of making mostly low-commitment plays into the first round on average, this round is usually where the aforementioned bronze engines appear the most. With the overall reduction of efficient means to deal with these cards (i.e. units that deal enough damage to destroy the engine without costing many more provisions than the engine itself), there is more depth to this phase of the game than before. More often than not, it is correct to establish threats on the board that can escalate in value when left unanswered during Round 1. Doing so gives the opposition two main options.

The second option seems like the logical thing to do for the player, as the opponent will lose out on their engine’s value; however, removing the engine is at times even more valuable for the opponent. The lack of bronze answers to bronze engines results in a situation where the player must invest a powerful or high-cost card to deal with a low-cost engine. As such, the player then has lower card quality on average for later rounds in comparison to the opponent. This pattern of play has always existed to an extent and has been seen in more engine-based strategies since the dawn of Homecoming. However, it is even more prevalent now and, as a result, it is important for players to be mindful of the way they spend their resources in Round 1 especially. 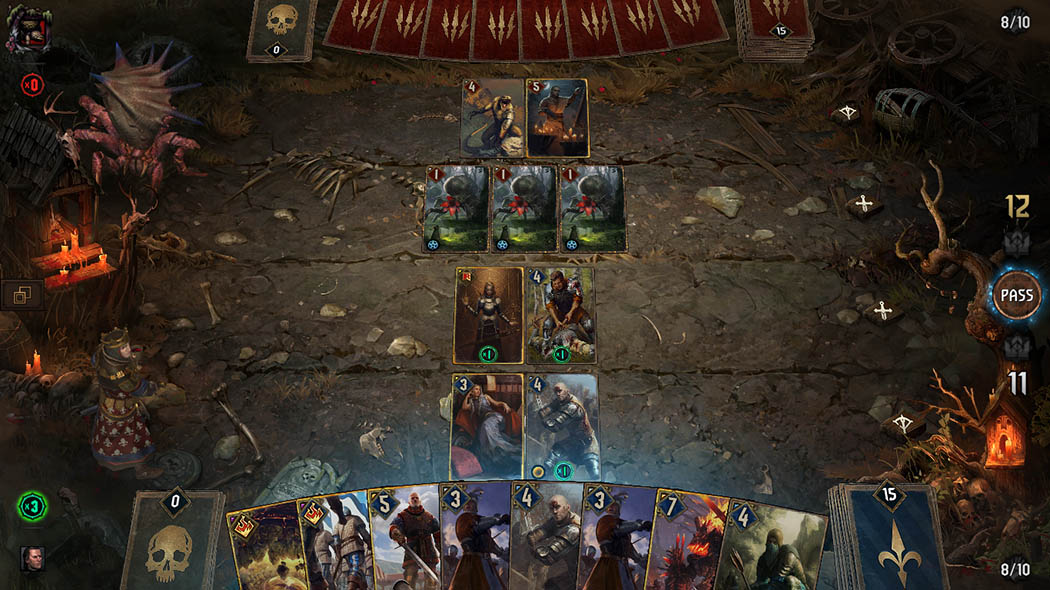 An example of the opponent putting us in a dangerous position. Vran Warrior represents an on-board threat and our only method of dealing with it is Seltkirk of Gulet, which is a card we would vastly prefer to save for leader and deal with a more threatening engine.

While the previous development (the interplay of low-cost engines and removal) was more of an extension of principles seen before the Bronze Update, the next gameplay shift is fairly unique to this game climate. With the increase of value to bronzes on average, the gap between the lowest provision-cost cards on the spectrum and the most premium is smaller than ever. Due to this, emphasis on card advantage has returned to its greatest point during Homecoming. Previously, decks that were powerful in a short round were able to bleed the opponent or force resources out of them in Round 2, only to win a short Round 3 through superior card quality. This element definitely still remains in the game and maintaining strong cards for the final round is important. At the same time, stronger bronze cards allow for some decks to more aggressively use their own resources to keep card advantage for the final round and stand more of a chance in a typically unfavorable position. As such, one should always re-evaluate the decision to push for card advantage or seek to maintain maximum card quality in decks that are often bled in the second round.

The Bronze Update Patch is perhaps the most exciting major update outside of expansions that Homecoming Gwent has ever seen. With so many moving parts and dynamic changes, the core of the game itself has seen a shift. The changes of the update have major effects on both deck-building and the gameplay itself and we will see these effects develop over the coming weeks and months. While we cannot yet judge the effectiveness of such large-scale changes, we can most certainly move forward excitedly, appreciating the potential and direction of the game in the future. Thank you for reading to the end and good luck on the path!

Card images from The Voice of Gwent. Editing & Website: SwanDive.