A game mechanic exclusive to the Syndicate faction that activates a number of card effects.

Coins work like an additional resource that may be gained and spent by certain cards to proc a variety of different effects. A player may have up to 9 Coins and at the end of a round, the total halved, rounding down. The number of Coins available to a player is depicted in the bottom-left corner, above the leader Charge counter, represented by a number in a gold sack.

While Coins are currently exclusive to the Syndicate in Constructed decks, they can be used with any leader in the Arena.

Available Fees appear on cards in gold. If you don't have enough Coins to spend, they appear in red, and if the Fee is otherwise unavailable, it will appear in bronze. 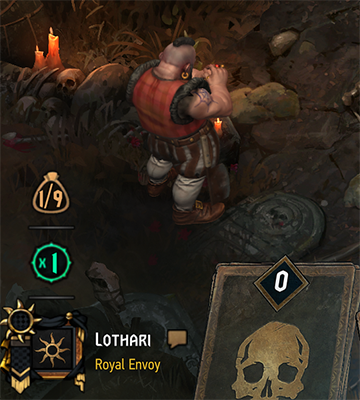 Your Coin balance is depicted next to your leader on the battlefield.