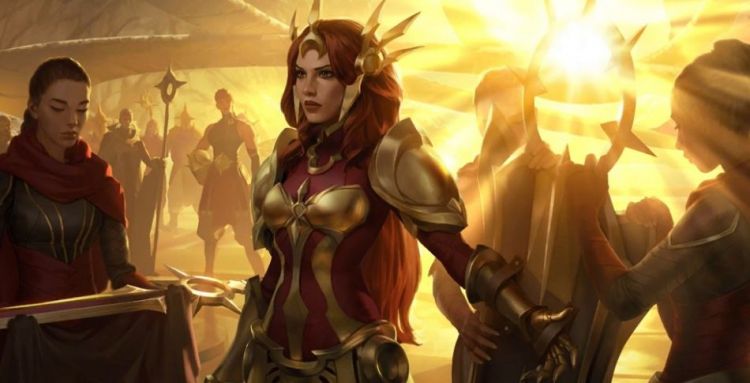 Here we attempt to provide a list of some of the best decks currently seeing play on the ranked ladder in order for you to heighten your understanding of the metagame, win more games, and climb the ranks. Attached to each deck is its decklist, a short explanation of its concept, its core cards, and a few tech considerations. We’ll be sure to update the Snapshot as the meta continues to evolve, and once the next balance patch is introduced.

Updates will also be announced on the Team Aretuza Discord Community, where you can also chat to Team Aretuza members and ask questions about decks, gameplay, and how to optimise your chances of climbing.

Meta Snapshot #1: Call of the Mountain

Sadly, the 2nd Call of the Mountain expansion has not shaken the meta terribly much. Still, a few new decks were introduced with the new champions

Shyvana, though they have had limited effectiveness so far.

Overall, the Frontrunners are much the same as they were before, with Warmother,

Lee Sin and Pirate Aggro being rather dominant, and MF/Scouts making a resurgence. Still, Runner-Ups remain powerful options which can take down any of them, and the metagame remains rather diverse on ladder.

We would like to thank all the authors, editors and contributors for their teamwork and dedication to excellence:

Frontrunners: Meta-warping decks that do well across a large number of matchups or require their opponent to alter their deck significantly to increase their odds of winning.

Dark Horses: Commendable decks that are decent options and can be used to climb or used in tournaments, but aren’t currently favoured by the metagame.

Honourable Mentions: Interesting or fun archetypes that offer little to no competitive advantage on average, but make use of powerful synergies which fall short of greatness because of a lack of payoff, consistency, or both; or sometimes require an extreme amount of proficiency with the deck to achieve goods results.


My deck isn't in the Snapshot. Does that mean it isn't viable?

It is possible to climb with a deck that isn’t listed here. This Meta Snapshot is meant to collect decks that are relevant to the metagame, but casts no judgment on decks that are not included, though there is a reason they aren’t. Experimenting in card games is healthy, and just because an archetype isn’t popular, that doesn’t necessarily mean it’s weak.

What data are the rankings based on?

We use both data given to us by websites which use deck trackers like Mobalytics, coupled with the play experience of several Master rank players in Team Aretuza. Practically speaking, this means we base our rankings on what we encounter while playing, as well as our experience of all past metagames since LoR was in beta, as well as tournament results. These are then tempered by deck-tracker data, used to refine the rankings further, removing our personal biases towards deck archetypes as much as possible. It is far from perfect, and we understand that both sources of data are inherently biased, however there is currently no alternative unless Riot Games elects to release ladder data publically, which is its own can of worms.

Are you only including the best decklists?

Short answer, no. Some lists are bound to be weaker or more situational than others while still providing an interesting archetype worth playing; and power levels may change or be given support through balance changes or new sets. For example, it is entirely possible for a Frontrunner to reliably lose to a Dark Horse. How can that be? Shouldn’t the Dark Horse be inherently weaker since it is considered a lower rank? Simply put: the Dark Horse may have a good match-up against this specific Frontrunner, though it is generally still pulled down by other weaknesses against other meta decks, bringing its overall win rate down. The meta is a complex beast and decks cannot be well measured in a vacuum.

Do I have to use a Frontrunner deck to climb the ladder?

Absolutely not. It is perfectly viable to climb with any other deck, even those amongst the Honourable Mentions, or decks not listed here. The metagame can be a strange beast, but understanding which decks are prevalent and playing a deck that does well when facing them is generally a good strategy, and that is true no matter what “Tier” a deck is said to belong to. Most of all, consistency is key in order to climb. The metagame is a living organism that can shift extremely quickly, sometimes day-to-day, though that’s most often the case after balance patches as players are figuring things out, or when popular players release content connected to a specific archetype.