Greetings fellow Gwenches and Gwentlemen. My name is Easha Dustfeather, member of the Gwent community that is the Lodge of Sorceresses, which supported me once again while writing this article. I welcome you back to Gwent. A lot has changed with the Homecoming Update and this FAQ is meant to point out the most notable differences compared to the classic Gwent you used to know.

Where are all my cards?

All the cards in your collection were automatically milled and you were refunded their full value in scraps. For your premium cards, you received an additional amount of scraps back, but no meteorite powder. The cards you currently own are the ones in the new starter decks. If you tried Homecoming for a few games but have not played ever since, you have the first (and sadly weaker) version of the starter decks; if not, you received their reworked second version.

How to spend all the scraps? - Changes to Scrap economy

If you had a well-developed collection pre-Homecoming, you are most likely drowning in scraps and can craft a full non-premium collection. Premium cards can no longer be crafted using scraps, but there is a new way to convert scraps into premium cards: Once every while, special premium kegs are sold for 4,000 scraps. They contain premium cards from all sets to date.

Premium events (where the last three cards offered in each keg are premium) are gone for now, but CDPR has hinted that they would consider alternative versions of such events.

You might also notice that some cards can't be found in kegs. Those cards are part of Thronebreaker: The Witcher Tales, a standalone Gwent-based RPG. You can get all Thronebreaker Gwent cards by purchasing the game, or you can still craft their standard versions; however, the premium ones remain exclusive to purchasers of Thronebreaker.

What are reward points and the Reward Book? – Changes to the reward system

Instead of ore for your daily crown progress, you now receive reward points. Learn about them here. Their main advantage is that you can spend them according to your preferences in the Reward Book. As a returning player you might not have much use for scraps, so you could spend them on meteorite powder nodes instead.

Please keep in mind that there are tabs to browse different pages of the reward book, located at the rightmost side of it. Apart from resources, you can also get new vanity items like board/leader skins or card backs via the Reward Book. Some of these items are sold in the shop as well. 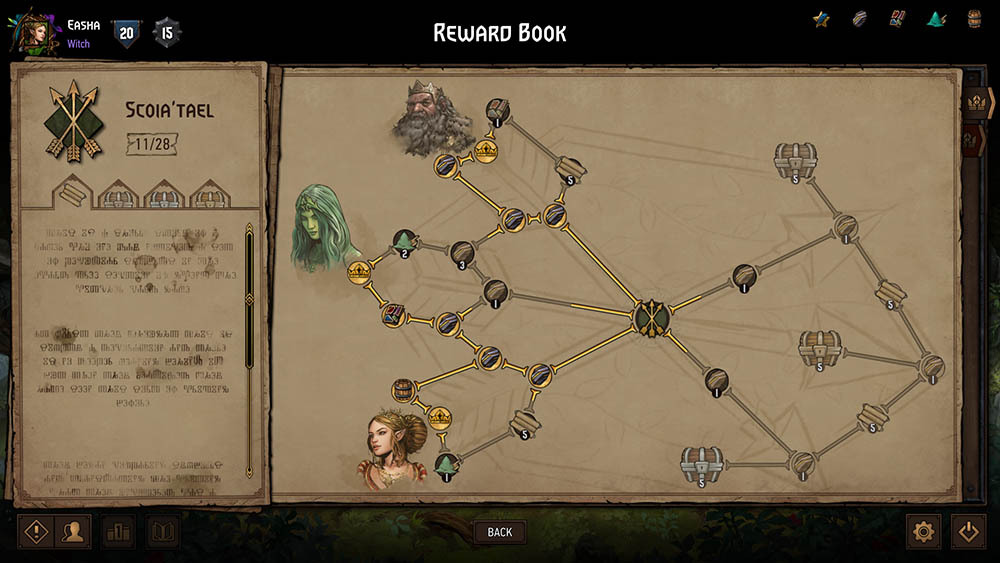 How can I get even more rewards?

A new quest system has been introduced. Check your quests in the quest tab of the main menu in the lower left corner, it should be rather self-explanatory. 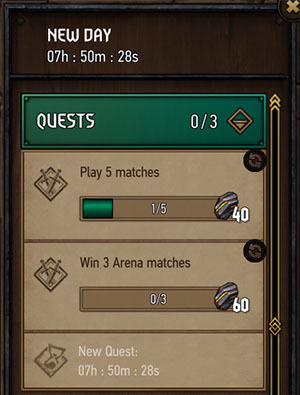 How do I build a deck in Homecoming?

The old limitations of 4 golds, 6 silvers, and 3 copies of each bronze are gone. In fact, silver cards have been removed entirely and the bronze limit has been brought down to 2 copies per card. The number of gold cards, however, is now unlimited. The minimum number of cards in a deck remained at 25. Out of those, at least 13 cards have to be units.

Instead, decks are limited by their provision cost. Each deck has 150 provisions plus the provisions added by your leader ability at its disposal. Cards you add cost a certain amount of provisions which is stated at their lower right corner. Leaders themselves are no longer playable cards but present as 3D-models next to the board where you can activate their abilities. As of Patch 4.0, which will release at the beginning of October, the leaders and their abilities will be separated. Leaders will be just a skin, the leader ability will define available provisions. So don’t be confused if you see Eredin Bréacc Glas putting Drone tokens onto the battlefield. You can find out more about provisions and leaders here.

Overview of the old Scoia'tael leader cards and their respective new ability icons, by The Voice of Gwent.

The most significant change apart from the aforementioned leader models is the removal of the Siege row. In Homecoming, there is also a row limit of 9 cards per row – if you fill up both rows, you are forced to discard the cards remaining in your hand or pass.

Each faction has its own standard board design now. Additionally, there are more boards available for purchase or as rewards which can be used with all factions. In the game’s options, you can select whether you want to see your chosen board all the time or the board of the player who goes second during the match.

Board skins and the also new card backs can be combined with a deck in the deck selection screen. 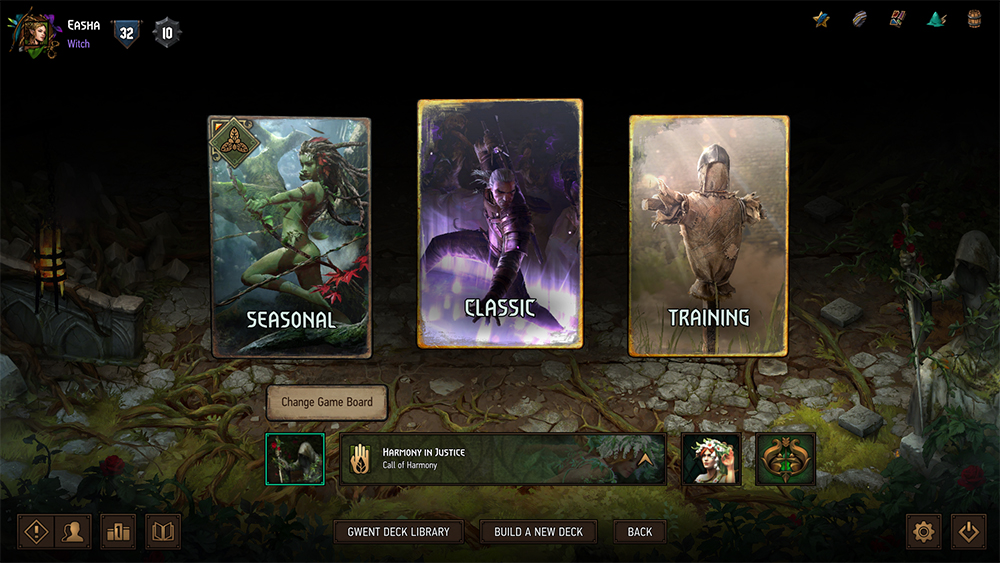 What happened to red and blue coin?

The design of the coin has been changed as well. The blank side represents the former blue coin where you have to go first. In this scenario, you also get the card Tactical Advantage on game start. It allows you to boost an allied unit by 5 on your side of the board and is meant as compensation for the disadvantage of going first. The monster head replaced the former red coin when you go second.

Why are my cards so weak?

The power level of cards has been toned down significantly, you will rarely see the huge point swings and tempo plays from classic Gwent again. Card strength is now evaluated in points per provision (PPP). Learn more about this here.

Are there changes to the game rules I should know about?

Gwent after Homecoming is still very similar to the classic version. The most notable differences are the changes to hand size, draws and mulligans:

There are also many new keywords that affect how cards work. Read about them in the glossary.

I am a competitive player. What about Ranked mode and seasons?

Each Ranked season lasts for one month and comes with a seasonal game mode with a different ruleset and seasonal Reward Trees in the Reward Book.

Many tutors were removed; the few remaining ones usually have a high provision cost. Thinning down to (almost) zero cards is no longer a necessity like it used to be in classic Gwent. Instead, cards now generally have enough value on their own, so tutors are no longer mandatory to make a card playable. The new draws and mulligan system still let you see almost your entire deck, so there is not as much inconsistency as one might have feared at first glance.

Silver spies were considered unhealthy for game balance and thus were completely removed. There are still some cards which grant card advantage remaining, for example Ciri (as known from classic Gwent) and Ciri: Dash.

As per now, there are only “hazards” or “weather” in Gwent Homecoming. The positive row effects have been removed with the exception of Blood Moon from Crimson Curse.

Introduced in the July 2019 Novigrad expansion, the new Syndicate faction – with its unique Coin mechanic – is considered a faction for advanced players, which is why it did not receive a starter deck. You can get this faction’s cards from dedicated Syndicate kegs for 100 ore per keg, or you can craft them with scraps in the deck builder. The expansion also included dual-faction cards which can be played in Syndicate and one other specified faction, such as Tidecloak Hideaway for Skellige.

I used to play archetype X – where is it?

The classical archetype concept has been changed with Homecoming. Now, decks typically combine several synergising card packages, instead of only one archetype.

Some cards did not even make it to Homecoming, while others were drastically reworked. Homecoming also added many completely new archetypes and mechanics. If you want to know about current decks, check out Aretuza’s Meta Snapshot.

The following list shall provide an overview of classic pre-Homecoming Gwent’s (in)famous archetypes which you might miss:

Worry not, your favourite troll Shupe's Day Off is still available with the same deck-building restriction and Shupe decks are still quite commonly played.

The archetype still exists, but it no longer revolves around duplicating Nekkers via Nekker Warriors and building carryover in the deck. Instead, Deathwish units are Consumed right on the board or in the graveyard with, for example, Barbegazi or Ghoul respectively. You will also find some old acquaintances like Mourntart. The playstyle of the Deathwish archetype in Gwent Homecoming did not change much from what you are used to know.

While this playstyle still exists (Joachim de Wett's effect is still comparable), the game plan has drastically changed, primarily due to the lack of bronze tutors which makes the former Emissary-chaining impossible. With the newly introduced row limit it would also be too strong to block the entire board of your opponent with your Spies.

Viper Witcher and Ointment now have completely different effects. The archetype is gone.

While there are still Reveal cards like Triss Merigold or Spotter in the game, cards are now Revealed from the deck and no longer in the players’ hands. With the removal of some bronze Reveal cards the archetype lacks support and is currently non-existent, even as a card package.

Soldier Swarm is still part of the game. Some card names might have changed, but the strategy remains. Notable swarm cards in Homecoming are for example Vreemde, Daerlan Soldiers and – just like in classic Gwent – Slave Infantry.

With the upcoming expansion Iron Judgment, Armor will come back to the game. However, another concept of protecting your units is still available with Shields, which work like the Quen effect in classic Gwent. Some card effects are very similar to the former Armor mechanic: Kaedweni Cavalry is comparable to the old Redanian Elite, and King Roegner works similarly to beta Vincent Meis, who has a different effect now.

While never really gone in Homecoming, the 3.1 patch of August 2019 reintroduced the Crew keyword and several additions to the Machine archetype which thus became more similar to its classic Gwent version.

Handbuff is one of the few carryover mechanics still remaining in the game, for example Sheldon Skaggs now has the old Blademaster effect. Invigorate is the staple leader ability of the Handbuff archetype; however, the Handbuff package of Sheldon, Ithlinne Aegli and Dwarven Agitators is also used in other ST decks.

While there still cards like Sage and Harald Gord for a Spella’tael archetype, it is not considered enough to build a competitive deck around it and is thus just a shadow of its former self.

While not exactly the same, cards with similar effects are still available: Svalblod Priest and Heymaey Protector are similar to cards used in the beta Greatsword archetype. An Craite Greatsword itself has now the old Axeman effect.

This archetype no longer exists, because the Strengthening mechanic has been removed from the game.

Despite all the changes, it is still Gwent – The Witcher Card Game. It might be a good idea to start your experience from scratch again and give Gwent Homecoming the chance to impress and surprise you like back then, when you tossed your first cards at the tavern table. Maybe consider yourself a new player for the first few hours, but while you are playing you will recognise more and more from the past and how it has changed until it will all come back to you.