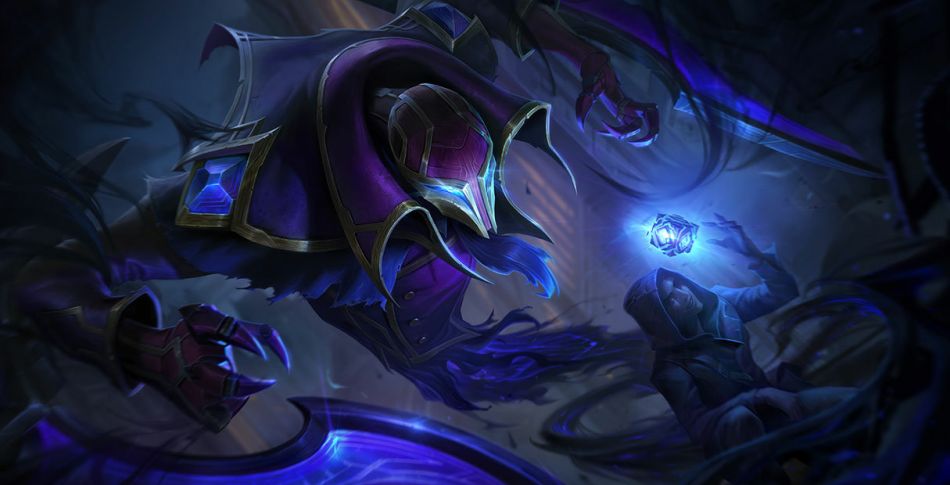 Call of the Mountain expansion: Nocturne | Early Impressions Part 4 of 7

Welcome to Part 4 of Early Impressions where I make sure everyone knows my opinion about the newest Legends of Runeterra card reveals! For this one, I'll be focusing on Nocturne and... his(?) cohort of spooky monsters, the ones that dwell in the hearts of men. 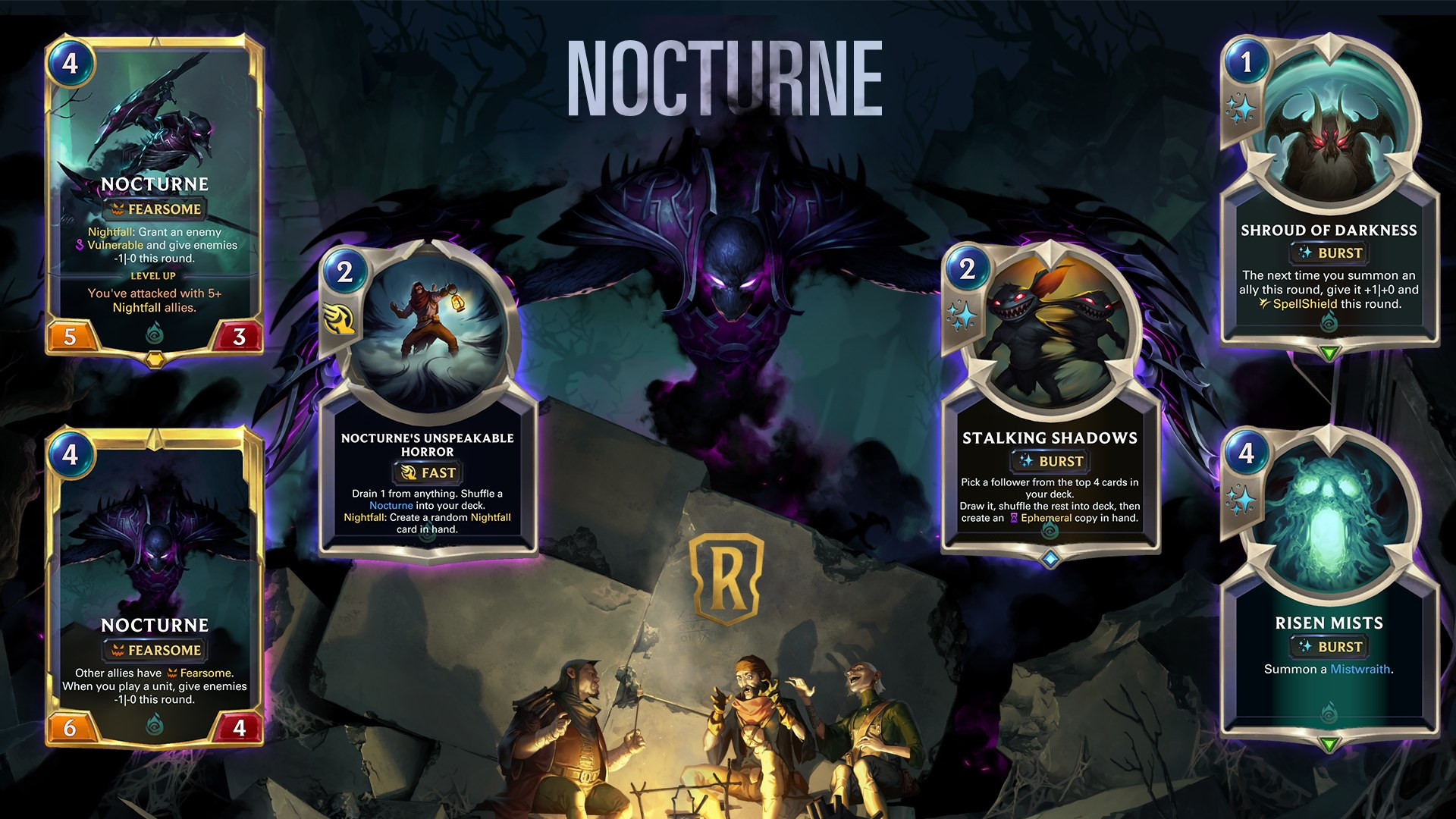 Nocturne introduces a new keyword, Nightfall, which only activates if this is not the first card played this turn. This keyword is a bit awkward, as it prevents players from playing on curve, or is going to require proactive low-cost spells for consistent activation.

Nocturne is without a doubt geared towards an aggro playstyle considering his statline. 5/3 is actually one of the better raw statlines for a 4-drop, only bested by a few, such as

Hunting Fleet, who both have clear downsides. The problem for Nocturne is his low health pool that will make it hard for him to survive combat or removal. While the applied Vulnerable should help him alleviate the former, the latter is still a serious issue. Additionally, his level up condition relies a lot on other Nightfall units being relevant in the game, without which he will not be able to level up consistently, though that is not always a dealbreaker. His level two is deceptively strong, as his board-wide debuff triggers every time a unit is played, possibly crippling an entire board. Fearsome aggro has been an archetype in the past, and Nocturne should be able to fit right in. Outside of that specific archetype, he acts much like a better

Frenzied Skitterer that grants the opportunity to dispatch a priority target while weakening the rest of the board. 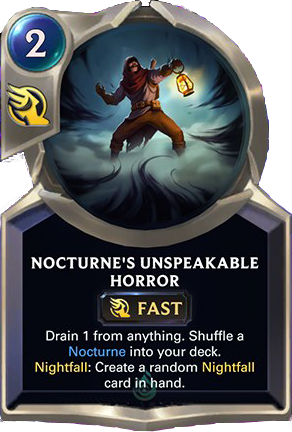 I was talking about proactive low-cost spells earlier, and this one fits the bill, though of course it requires Nightfall itself and therefore doesn't work so well as an enabler. So while it can technically work as a Nightfall enabler in a pinch, I'd rather get full value out of it or Unspeakable Horror ends up being a worse

Vile Feast. Overall, this is a version of

Vile Feast that could be awkward to activate and is slower, but would in theory provide more value in the long run. Unspeakable Horror doesn't even need to be in a Nightfall deck to find a home, though its own value depends on the average strength of existing Nightfall units, and all have not been terribly attractive so far, which could result in Unspeakable Horror generating any number of weak cards, or one that simply does not synergise with our deck. 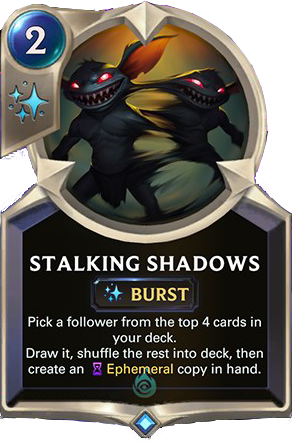 Stalking Shadows is considerably strong. Its draw condition is consistently achieved by including enough units in our deck, and the effect is great for its cost. Effectively,  this card picks and draws a single unit twice, one of which becomes Ephemeral. For 2 mana that's a great deal and we already know that even though Ephemeral is technically a downside, it can easily be built around to become a tool instead, as many units we'd include in such an archetype would either already be Ephemeral or would not mind becoming it. A valuable yet cheap drawing option that is sure to enable interesting strategies. 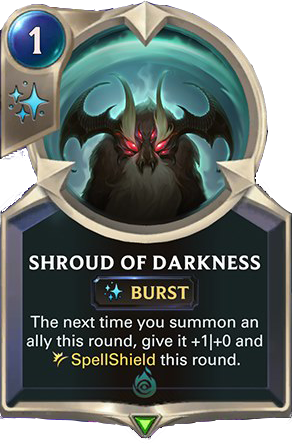 While Shroud of Darkness can look low-impact and is a definitive dead draw if we run out of steam, it is a powerful yet cheap enabler for many units that must stick to the board to gain value. It is also an efficient way to activate Nightfall of course, and Nocturne is an obvious candidate for the Shroud, though other powerful win conditions could benefit as well, like

They Who Endure. Shroud of Darkness will not have too much trouble finding value, either in aggro or combo decks. 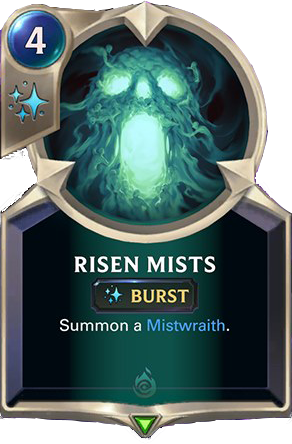 Mistwraith synergy! 4 mana sounds steep to generate a 2/2, however if built around a

Wraithcaller shell, Risen Mists could be the card that brings back the archetype, or at least the

Mistwraith package into aggro and midrange. The Burst speed is also deceptively powerful, as it allows board development without losing the opportunity to open attack, and can finally be used to surprise-buff other

Mistwraith in order to allow advantageous trading. Risen Mists, despite its cost, is looking like a strong power-up for the 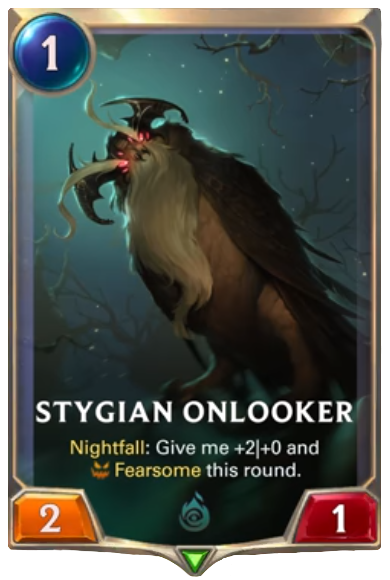 Stygian Onlooker is cosplaying as a 1-drop, pulling its best impression of a

Precious Pet, but fails spectacularly. Currently, it cannot be used to full value on turn 1 unless we're willing to burn a lot of potential value by using

Warning Shot. So what does this mean? It means that the next best way to gain full value from Stygian Onlooker is to play them after turn 1, at which point they become open to a wealth of potential removals and is very unlikely to gain any value at all. Unless a free Nightfall enabler or a way to maintain Nightfall buffs are revealed, Stygian Looker has little hope of seeing play, and is in fact one of the worst 1-drop in the game on its own. 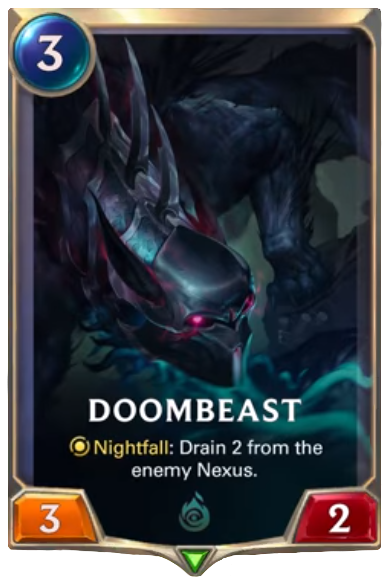 This card seems to have a bit of an awkward statline at 3/2, but the card can at least trade well against most other 3-drops. I'm not quite seeing the purpose of this unit. I would never want to play a vanilla 3/2 for 3 mana, therefore it is essential to trigger the Nightfall bonus, and while that is awkward enough on its own, what does draining 2 from the enemy Nexus truly do for us? In an aggro deck, playing an out-of-curve understated 3-drop is not worth the 2 damage, so perhaps Doombeast is better suited as a defensive tool? Though at this point we're better off fielding

Imperial Demolitionist and find it lacking as it tries to achieve too many things and ends up merely average, and thus making it rarely worth including in any deck unless in need of an additional burn. 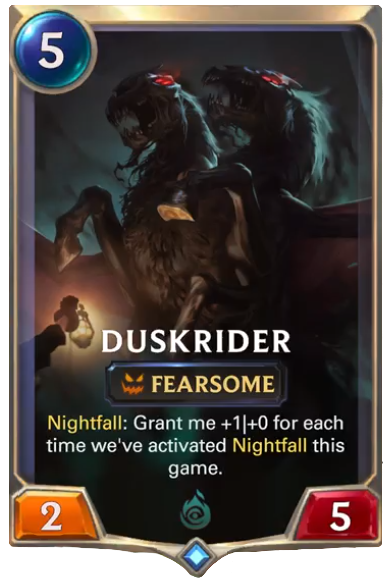 Duskrider has good health for its cost and Fearsome is always welcome to avoid those annoying chump blockers. Quite obviously tailored for an aggro gameplan, Duskrider relies heavily on the presence of other Nightfall units to complete its job as a finisher. From what we've seen so far, that's going to be a big problem as the majority of Nightfall units have been average. Average is bad, and we want to find unfair advantages instead. Duskrider is a fine card on its own but requires Nightfall support to become anything more than an overgrown, edgy, two-headed, flying pony. Keep an eye on it as better Nightfall units are introduced, this one is likely to get finer with age. 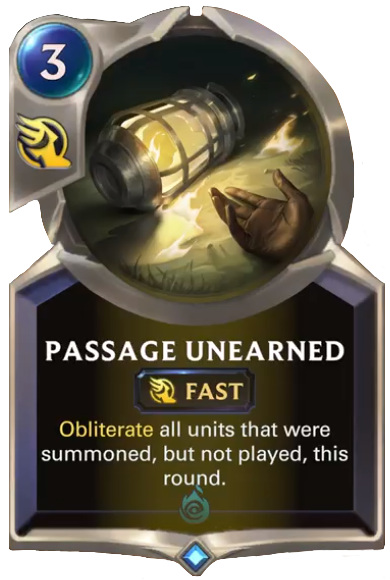 Passage Unearned's flavour is great, but its usefulness is debatable. While it is highly effective against a select few spells, it will be a dead draw for a large majority of games, or will barely break even in value. If a sideboard format is ever introduced, Passage Unearned could be a nice option to have in order to dismantle certain decks like Control

Ashe, but should otherwise stay away from ladder decks. 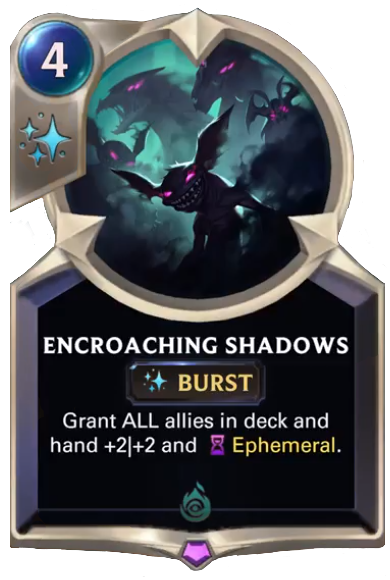 My first instinct is to say that this card is bad. My second first instinct is to say that this card is going to be a meme up to the point where it isn't anymore. Let me explain: Encroaching Shadows, as it brings no instant board value, is a card meant to generate value for later turns, which obviously makes it impossible or extremely hard to run in an aggro deck. Most midrange decks are board-centric and therefore will not enjoy turning Ephemeral, and +2/+2 is not a significant enough bonus compared to the downside of turning all our units into ticking time bombs for a control deck to run. So when is it good, then? I don't know. But I do know that this is exactly the type of card that is incredibly narrow in its use and needs a very precise environment to work consistently: a combo piece, in short. I believe that one day, someone will figure out the perfect recipe, and it is unlikely to be a meta we will look back upon fondly. For all our sakes, I hope I'm wrong and this card stays in the trashcan.

For all its flavour, this set of reveals does not show Nightfall in the best of lights. While Duskrider looks usable, he needs support from the archetype as a whole to be of any worth. Nocturne is looking quite fragile and easy to punish, though Shroud of Darkness could be a very solid combo enabler for him and other late-game win conditions. Risen Mists and Stalking Shadows both look massive, leaving the Nightfall archetype in the dust in the absence of combo enablers. 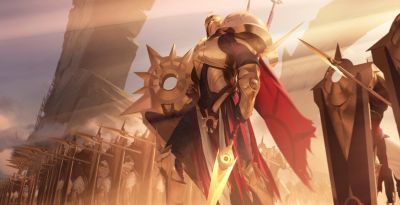 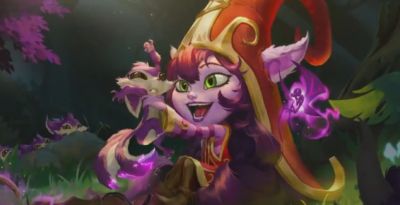 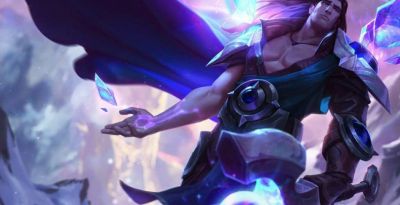