Homecoming: The Concerns, Solutions, and Development Strategy - Pt. I

Hi. I’m Lothari. I have been playing Gwent since the end of the Closed Beta and, having spent some time as a game developer in my day job, not only do I have a good grasp of the game as a player, but also some insight into its development process.

After a long wait, Homecoming is now right around the corner. What we’ve seen so far has made a lot of the community nervous. This is somewhat normal with all games, but with this article I’d like to look into some of the concerns raised so far and whether we actually need to worry.

This article is one of two that will be published over the coming days.

Before we dive into things, it’s important to take a look at what Homecoming actually is. Marcin Inwiński’s open letter to the Gwent community, the one that signalled the start of Project Homecoming, gave us a good insight into this.

Let’s look at what I think is the key sentence of the letter. “And boy…, were we naïve. Compared to the single player RPGs we had been creating so far, we didn’t realise how different it was to operate and develop a live game at the same time.”

The fact is, as much as we love this game, from the moment it arrived in Closed Beta it was deeply flawed, and though CDPR have done some triage work, they have failed to fix the fundamental problems with the game.

That is, until now.

As a developer, I can imagine how painful it must have been for the team to sit down and admit to themselves and each other, and the corporate branch of the company, that what they had been doing, no matter how hard they’d tried, wasn’t working. As soon as I read those words from Marcin, I knew that is what had happened. And once you’ve reached that conclusion, there is only one logical move to make, and that was exactly the move that CDPR made. Trying again from the beginning.

Though the words are never stated in that open letter, we all knew what it implied. A complete rebuild of the game. A completely different game after release. And perhaps this is what escapes some people’s attention.

Because though, yes, the game will be different, and it may even be better, that isn’t what Homecoming is about. More importantly than both of those things, this project is attempting to create a foundation. A popular topic within the gaming industry right now is ‘games as a service’ – the principle of a game that can be invested in not just once but many times over many years.

Collectible card games (CCGs) very much fall into this category; CD Projekt Red wants Gwent to be an economically viable product, as well as a popular CCG, that stands the test of time. Homecoming must provide them with a base version of the game, something they can build upon for years. It doesn’t need to be the quintessential Gwent experience – just the first building block on the way to something much bigger than itself.

And on top of that – key as we begin to examine people’s concerns from what we have seen of the game so far – it is the opportunity that the development team has so far squandered to fix those fundamental problems.

While we are on the topic, let’s address this first. Though it might not be the biggest, or rather the loudest, concern so far shown, if it proves to be well-founded it could be the most damning.

Has the development fixed those fundamental problems Gwent has suffered from throughout its lifetime?

To answer that question, we must take a look at what these problems are. Naturally, different people will have a different view on what these are. Disclaimer: These are my views. What you read elsewhere may contain something completely different. Despite what some believe, there probably isn’t one correct answer to this.

For me, as someone who enjoys playing CCGs, there have always been two key problems with Gwent. The first is the coin flip, and deciding who goes first and second. In all asymmetrical games, which most CCG are by the fact that the players start with different cards in hand, someone is disadvantaged by the coin flip. To keep the game in balance, the developer must provide some advantage to make the playing field level again.

In Hearthstone, Magic: The Gathering and Yu-Gi-Oh!, the disadvantage lies with the player going second, and to balance this the first player in Magic is not allowed to draw a card on their first turn, the second player in Hearthstone game is given an extra card in their hand and one free mana to use at any time during the match, and the first player of a Yu-Gi-Oh! game may neither draw a card on their first turn nor attack.

In Gwent, the coin flip has simply remained unbalanced. Starting on an equal number of cards, going first means you are the first to give up a card, unless you want to dry-pass and end your participation in the round without playing a card, which comes with its own host of strategic risks.

If the second player can then play more points than you in their one card, you will always have to use one more card to catch up. This culminates in a situation where if the second player can get far enough ahead that you play a card and are still behind, you are forced into a difficult choice: lose the round one card down or win the round two cards down. One at least puts you in control of what happens next, but as long as your opponent has more cards than you, chances are you have already lost. 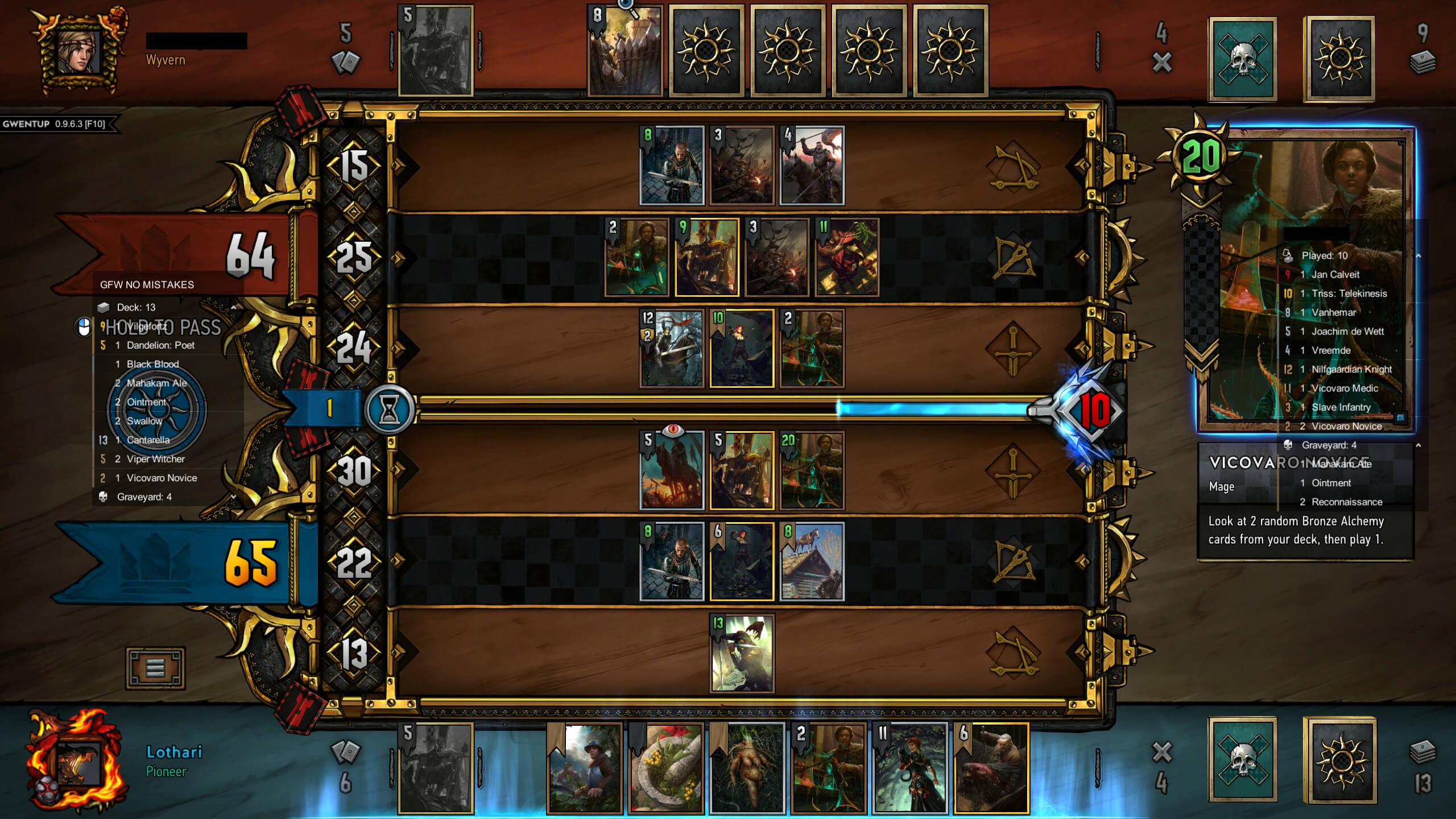 This brings us to the second fundamental flaw of the game, the importance it places on card advantage. Because every card has a strength that contributes to your final score, as well as an effect to generate more points (sometimes), the more cards you have in hand, the more points you can generate. If you then have more cards than your opponent, you increase your chances of being able to overcome their score.

CDPR have introduced some elements to try to counter this, cards like Ciri: Nova, the ever-impressively ridiculous Nekker Consume deck, more consistent ways to make cards like Olaf with Adrenaline Rush stick. While they can counter the problem, they often don’t, and so none of that changes the fact that in Gwent, card advantage is king. And the reason this is a problem? Because it is nigh-on impossible to gain card advantage back, meaning the game has swung completely out of one player’s control, and it is no longer a fair contest.

Has Homecoming solved these problems? Some of the latest answers from the forums, as well as information given in the first-look video released a couple of weeks ago, look promising for the coin flip.

In the video, lead gameplay designer Michał Dobrowolski states that the blue-coin player, the player going first, is likely to receive an extra mulligan (or maybe even two or three), and recent answers from Paweł Burza, the Gwent community manager, on the CDPR forums have said they will also receive a token worth a number of points to help them keep tempo with the player going second.

While the extra mulligan is a nice addition, the token actually solves the problem if implemented properly. The simplest solution is to have this token on the blue-coin player’s board at the beginning of the game, or to have it come onto their board automatically at the beginning or end of their first turn. Alternatively, this token could be something the player must choose to activate, much like The Coin in Hearthstone (the one free mana I referred to earlier).

This is slightly dangerous, though. If implemented in this way, it must be an extra action the player can take on their turn, as it looks like the new leader abilities will be. It cannot be allowed to be the only action a player can make on their turn. If the token carries the same value as a bronze card, thought to be around five strength at this point, then it is not likely to succeed in helping them stay ahead as, at best, it is a standard play, and at worst it is simply not enough points. To rectify this, the token would have to be over-valued, and therefore tilt the balance in the other direction, giving the second player a serious disadvantage.

With all of that in mind, my developer’s brain tells me that making the token an activated play is just not worth trying, and that we will almost certainly be seeing it added to the board automatically. It then comes down to how much this token is actually worth, which can be smoothed out in balancing. Overall, it is a very acceptable solution to a very old problem. Proof, I think, that CDPR are starting to learn from their previous mistakes.

Whether or not they have fixed the game’s obsession with card advantage is more difficult to gauge. Cards will still have a strength that contributes to your final score, so it remains likely that card advantage will still be a key component of the game. The hope must be that it isn’t the only key component. I know Nekker or Greedy Consume gets a lot of hate, but the reason I personally like it so much is because it works so differently to many other Gwent decks that exist. A Nekker Consume player can go one or even two cards down as early as Round 1 and still win, simply because each card holds so much value that it doesn’t matter that you have three when your opponent has five.

I think the solution lies in designing cards that allow more decks like that to exist. Most collectible card games, all the ones I know anything about, have a basic concept of the deck type triangle, even if in reality it’s not so simple. In Gwent, control decks beat greedy decks, which beat point-slam decks, which beat control decks. While current-look Gwent does have greedy decks, and decks that at least try to have a control element, in order to be at all viable, most must have a point-slam element, playing a card and getting immediate value out of it, which is what makes card advantage so important.

Probably easier said than done, but if the game developers can design cards that allow for more viable greedy or control options, not only will card advantage become less important, thus better solving this key issue with the game, but at the same time both give players more interesting deck type options and serve to address complaints that “all we see is point-slam” (a statement that, regardless, is still categorically wrong).

Aside from this, many other concerns have been raised about how Gwent will look after Homecoming. I won’t touch on them all, but I do want to address a few more.

This concludes the first half of this article. If you'd like to see how my thoughts are concluded, please stay tuned for part two, coming this weekend.