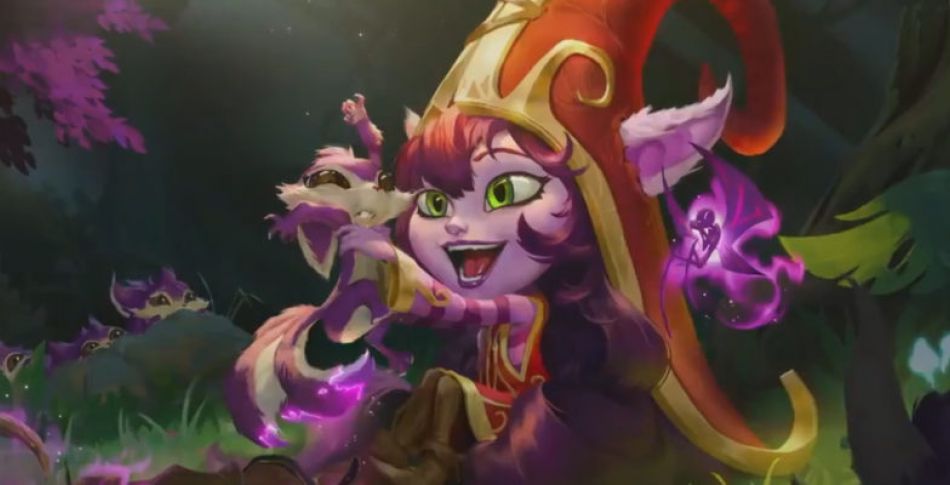 Call of the Mountain expansion: Lulu | Early Impressions Part 2 of 7

Welcome to Part 2 of Call of the Mountain: Early Impressions! This time, we’ll be taking a look at Lulu and her Ionian followers to figure out exactly what squirrelly shenanigans they’re getting up to. 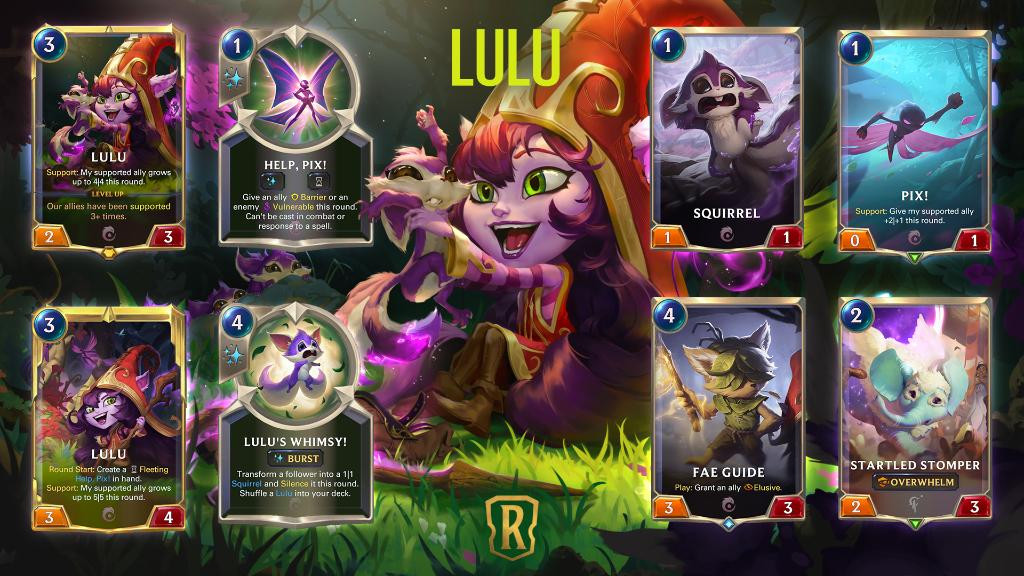 First off, it has to be said that there is something seriously wrong about how Level 1 Lulu stares at this squirrel… But at least she seems more well adjusted on level-up, so all is not lost. Her weak statline is compensated by a powerful Support ability, allowing her to grow a unit to 4/4. In theory, this means Lulu pairs best with units who benefit from added effects after combat but rarely do so because of their low Health, however in practice it’s more likely that she will be of use in aggro decks focused on swarming the board with weak units for her to power up. Supporting Challenger units to take out troublesome blockers should also be a viable tactic as is already being seen with

Her level-up looks reasonably easy to attain, as unlike Taric she doesn’t need to be on the board for it to trigger. Her Support ability becomes better, yes, but the most important part is the generated Help, Pix! spell, which has many potential uses. While not a true Burst spell, it can be used on attacking turns to set up a favourable trade, and also indicates that Lulu could be a worthwhile addition to spell-based archetypes like

Lee Sin, or even

Ezreal, though that could be a bit of a stretch. The other obvious ones are

Shen with the Barrier synergy. Lulu should easily find a home in an aggro deck focused around playing a wide board, or a midrange archetype where she supports key Challenger units. 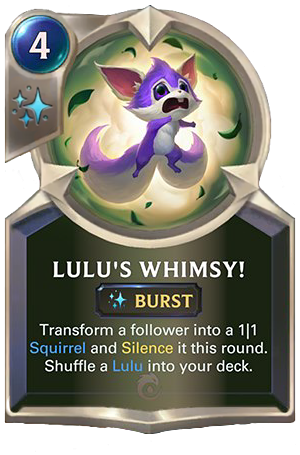 Transmogulate! Turn your biggest fear into a cute squirrel for a single turn, what’s not to like? At Burst speed, it is easy enough to set up a favourable trade during the combat phase, and it can even deal with normally insurmountable win conditions like

They Who Endure. It is a more conditional removal than

Vengeance, true, but is also much cheaper and will make opponents think twice before attacking blindly when facing Ionia. 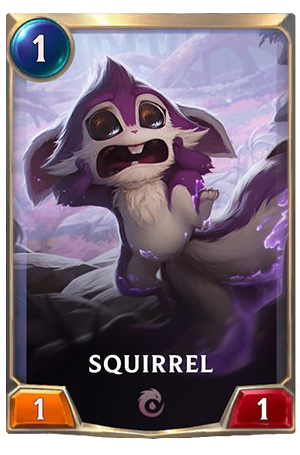 A cute squirrel. The weakest 1-drop in the whole game. It is a token, thankfully, the result of Whimsy and perhaps other Squirrel-creating cards we have yet to see. Moving along. 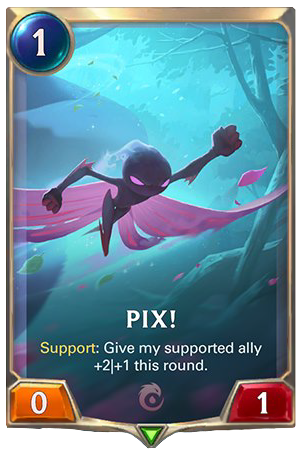 As always, a Support unit boasting a weak statline. It offers decent stats despite being an easy-to-kill 1-drop, though if it supports a non-Challenger unit, Pix will likely die in an unfavourable trade. The only reason I see to run this card would be to accelerate Lulu’s or Taric’s level up while playing towards a wide board gameplan, but I wouldn’t recommend using it without any ways to protect it from blockers, or the loss of value will severely cripple your odds of winning the game. 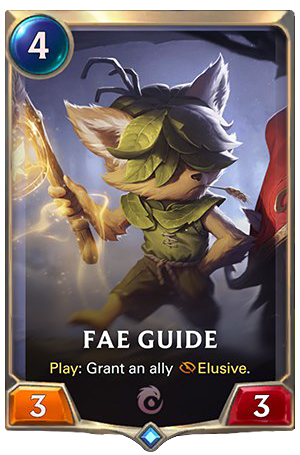 An intriguing effect attached to a weaker 4-drop statline. Elusive is a powerful keyword, and the ability to permanently grant it to an ally would normally make me wary of the ramifications for future sets, as this has the power to make any unit ignore most board states. However this sentiment is tempered by the existence of

Sumpworks Map in which yields the same effect at Burst speed yet rarely, if ever, sees play. Is it due to its low impact? Is it because of its existence in Piltover & Zaun, a region that typically doesn't run full-blown Elusive decks? Will Fae Guide’s body make up for its slowness? I believe it will find a home eventually, at the very least as a tech card in a board-centric meta where bypassing the enemy board could very well mean victory. Either way, a card with some potential to keep in mind when dabbling with Ionia as it could unlock surprising opportunities, though is unlikely to become a staple of the region. 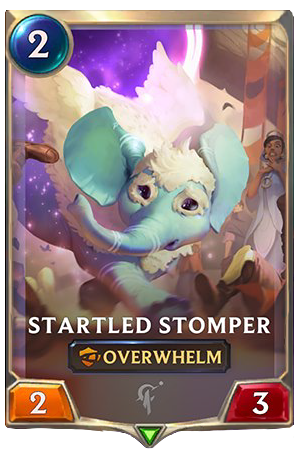 An oddity, the lone Targon card in the reveal. A thoroughly unimpressive 2-drop, with average stats and an awful keyword. Overwhelm is normally welcome, however it fails to deliver when the unit packs no punch. Now, that does not mean the card is unusable. It could perhaps see play in a buff-heavy deck that relies on Support and spell buffs, or a yet unrevealed card that somehow synergises with the Overwhelm keyword, but I see no other reason to field Startled Stomper otherwise, no matter how cute they may appear. 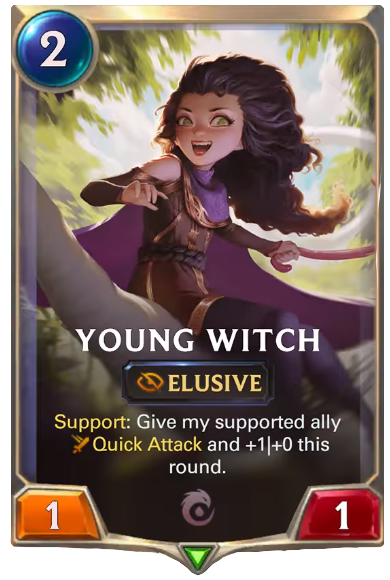 Part of the supportive package surrounding Lulu, Young Witch fits right between Pix and Lulu on the curve, allowing a unit to attack without fear and needing no protection thanks to her own elusiveness. Her low statline doesn’t get much better with the Support buff, and most of her power is packed into her own Elusive keyword as well as the Quick Attack keyword she gifts to another. Her viability hinges on how beneficial Quick Attack is going to be in an aggro deck to set up a powerful board. If the past metas are anything to go by, the answer is: not so much, as players will simply tend to ignore the Quick Attack unit until they can remove it safely. Like her friend Lulu, Young Witch would pair best with a challenger unit to force advantageous trades, but her low health is troublesome, as she dies to literally any removal. As an upside however, her Elusive tag means she won’t be sent on a suicide mission on every given attack, and that could just be what sets her apart from other supports. 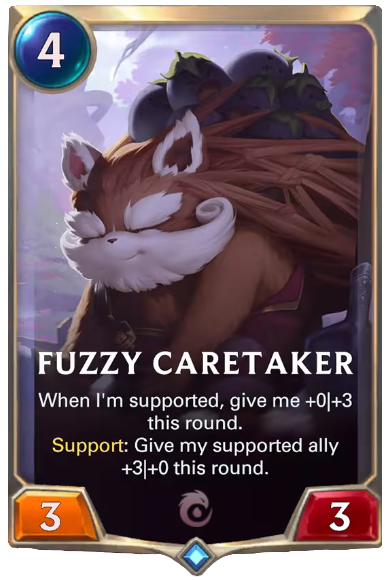 Fuzzy Caretaker has average raw stats but hides much swoleness under its fur. Feeling right at home in a Support archetype, they become a tenacious adversary when supported, and spread the attack buff to their right-side neighbour which is much better than keeping it for themselves. Fuzzy Caretaker should be best paired with Quick Attack or Challenger units, though they have a strange duality to them where the added health does little to progress an aggro gameplan, and yet the buff cannot be used while defending and thus can’t truly be used to further a control gameplan. This makes me think they would be too slow and awkward to play around in an aggro deck but could find a place in a midrange one that attempts to grind their opponent down through repeated, buff-powered assaults. In any case, Fuzzy Caretaker needs to be built around to excel, and the question is whether more Support investment is going to be worth the fluffy, fluffy payoff. I believe it will, granted the rest of the Support archetype can stand on its own feet. 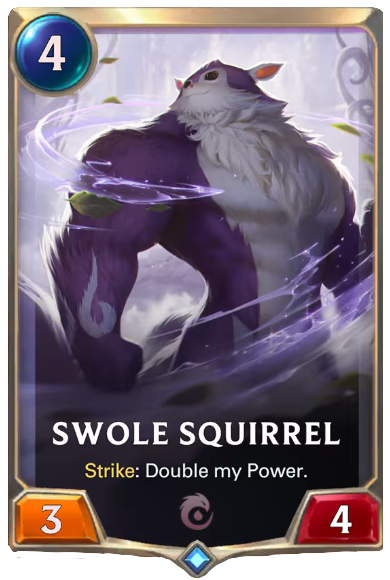 I wouldn’t want to cross that one in a dark alley, but in a LoR game it’s another story. I’m not particularly impressed by Mr. Swole here. Its statline is weaker than most 4-drops, and its payoff is only realized after combat which complicates matters. With no keyword of its own, Swole Squirrel is prone to being chump blocked and will struggle to deal meaningful Nexus damage. I can see a world where Swole Squirrel becomes part of a One-Turn-Kill combo involving [lor_card]Dragon’s Rage[/lor_card] or an Overwhelm enabler; perhaps pairing with Demacia’s barriers and Strike spells for quick growth, but it all seems awfully inconsistent at the moment. 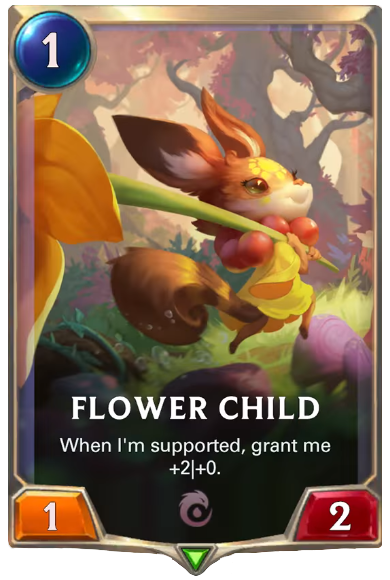 Greenglade Caretaker, Flower Child obviously needs to be built around Support units to show its true power, and luckily there is no shortage of those on turn 2 or 3, though the Child’s value decreases if Support units end up weak. If protected however, Flower Child has the potential to reach high attack values and threaten a lot of damage for a simple 1-drop. An interesting card that surely will see play in the aggressive Support archetype. 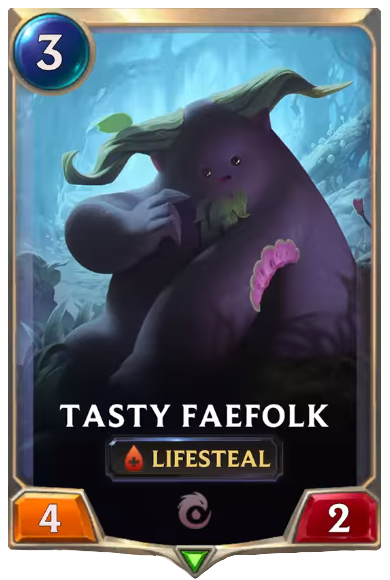 An anti-aggro unit serving the same function as

Deadbloom Wanderer, making it strictly better in a deck that doesn’t require Tossing cards. Its high attack ensures it can trade into all 3-drops and many 4-drops, though its low health makes it vulnerable to most removal options in the game as well as Quick Attack. Overall, Tasty Feyfolk is an average unit that still possesses the potential to become relevant in an aggro-heavy meta.

With the exception of Startled Stomper and Tasty Feyfolk, this set of reveals is at least synergistic and clearly paves the way for a Support archetype. Lulu and Whimsy both look potent, and while some of the rest may not look like much, they will certainly open deckbuilding options in the future.

Card game enthusiast since childhood, Asher has played as many CCGs as he could lay his hands on which kickstarted his competitive streak. Achieving high ranks in Hearthstone, Duelyst, and TES: Legends, his goal is now to do the same in Legends of Runeterra where he's achieved consistent top Master rankings, and compete in all possible tournaments. With a drive to always improve, Asher is looking to brew the best decks and help new and experienced players alike. 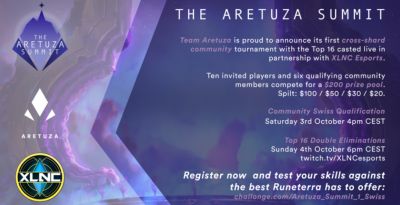 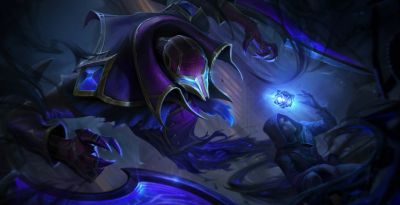 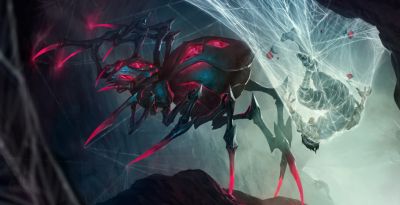