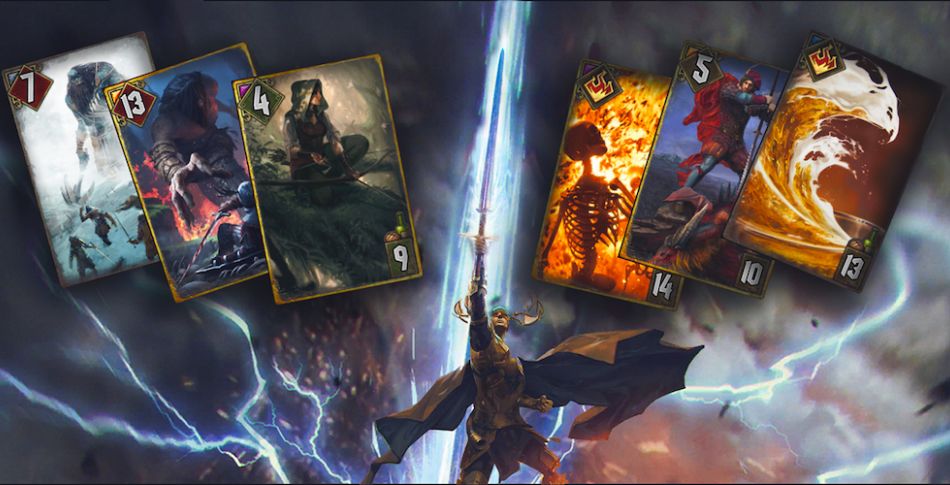 Since binary evaluation is not an option, we need to find an evaluation system that takes a holistic approach to rating cards. In Part I of this guide, we discussed niche vs versatile cards and point floor and ceiling. We explored the reasons behind the assertion that cards cannot be evaluated on a binary basis and started expanding on their intrinsic characteristics and connections to other cards in Gwent, aiming to develop a better evaluation system. Part II will continue this with one more set of factors, and then put it all together.

While the card examples in this article are partially outdated, the theory behind this analysis is still correct. We will be updating this article to be in line with the latest Gwent patch soon.

The third set of factors we will consider are conditional and unconditional points. This set is, as always, quite interconnected with the other two detailed in Part I, but it gives a slightly different perspective and some original insights. Conditional points, as the name might imply, are points that are only given if a certain condition is met. Bronze cores of many decks contain conditional cards, and those decks aim to satisfy their conditions.

The most basic (and maybe most extreme) form of conditional points is in a card like Blue Mountain Elite. If its condition is not met, it is worth 1 point, but if met, it is worth 5 points with 4 of those points being removal. Other conditional cards may not be as polarized, but the idea stays the same: The point floor and ceiling are often based on fulfillment of the condition. For perspective, another conditional card that is less polarized is Wild Hunt Hound, which either gains 4 or 6 points as opposed to the 1 or 5 of Blue Mountain Elite. These are just about the two ends of the conditional spectrum, and the risk/reward element is modulated according to the floor/ceiling disparity.

On the other hand, unconditional points are guaranteed, regardless of matchup or deck composition, and the floor and ceiling of cards that have these are usually within 1 point. Generally, these are either overcosted in provisions or undervalued in points because of their concrete nature, and conditional cards are overvalued in points or undercosted in provisions because their extra value only procs some of the time.

Elder Bear is a prime example of an unconditional card - a vanilla that gets its 5 points every time. However, its expected value should be 7 points for 6 provisions, or it should cost 4 provisions to give 5 points. We are paying PPP in exchange for consistency across matchups - essentially opposite a niche card, where we lose consistency to gain PPP. If we look at a card’s value by the average points it achieves in any given matchup (obviously it will be an estimation), a concrete card like Elder Bear will be at 5 points on average, every time.

However, cards like pre-Thronebreaker Leaders Patch Unicorn or Chironex are conditional. In a deck that draws 22 of its cards, you need to draw both cards to fulfill the condition, about a 80% chance when we take into account the possibility that it will. The card has a concrete value of 8 from its 4 power + 4 boost; and as for the conditional part, since it occured about 80% of the time, it added 0.80 * 4 = 3.2 points to the average value. So, the average value of Unicorn in a deck that draws 22 cards (reasonable; with at least 6 mulligans and 16 cards drawn, it’s almost guaranteed) is 11.2 points, above its expected 10. This is very similarly true for Chironex.

They each have utility outside of this - Unicorn as a boost and Chironex as removal, and additionally, they have versatility because you can choose whether you need the bigger boost or damage and they are not faction-locked. They are conditional, and therefore have a generous provision cost, but they are without the downside of inconsistent activation. From these points we can derive the reason why this dynamic duo was (and still may be) in so many decks - it finds the sweet spot of versatility and conditional points while not greatly suffering from the downsides of either.

Here, we will take a look at a visual comparison between the point floors and ceilings of types of cards discussed before, and examine possible reasons why those cards are the way they are. The graphs will consist of 4 cards each, where the blue bar represents point floor, the red bar represents ceiling, and the yellow bar represents the expected value based on the provision cost of the card. A short explanation and analysis will follow each graph.

Below we see some niche cards currently in the game. The bars going past the limit means that the card’s ceiling is nearly unlimited. Here we can visualize the reason why these cards are so risky to play; and we can also see the amount of points above the floor a card must achieve to meet or exceed its provision cost. 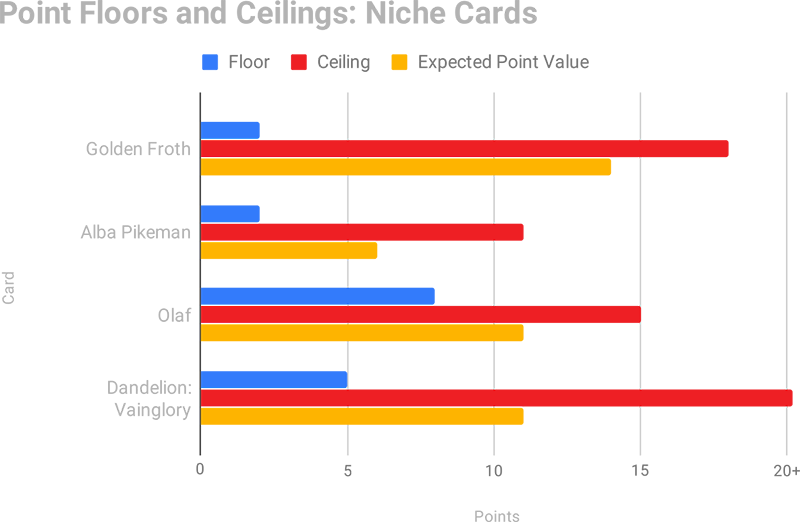 Golden Froth has an extremely large discrepancy between floor and ceiling. Its provision cost is skewed towards the ceiling, rather than before the patch, when it was skewed towards the floor, for more risk. Similarly, Alba Pikeman can be terrible or amazing depending on the situation, and interestingly, the provision cost is right about in the middle. Olaf has less of a gap, and the provision cost is actually skewed lower because it is harder to self-damage than many other enabling tactics in the game. Finally, Dandelion: Vainglory, as discussed earlier, can have insane value in a few matchups, but outside of this, it has an abysmal 0.5 PPP.

Next, we will look at some conditional cards and how they compare to the niche cards. Again, one card’s ceiling goes nearly infinite. The disparities here are less extreme, and there is a pattern of the provision cost being skewed more to one side (the ceiling, in most cases), as a reflection of the difficulty in fulfilling the condition. 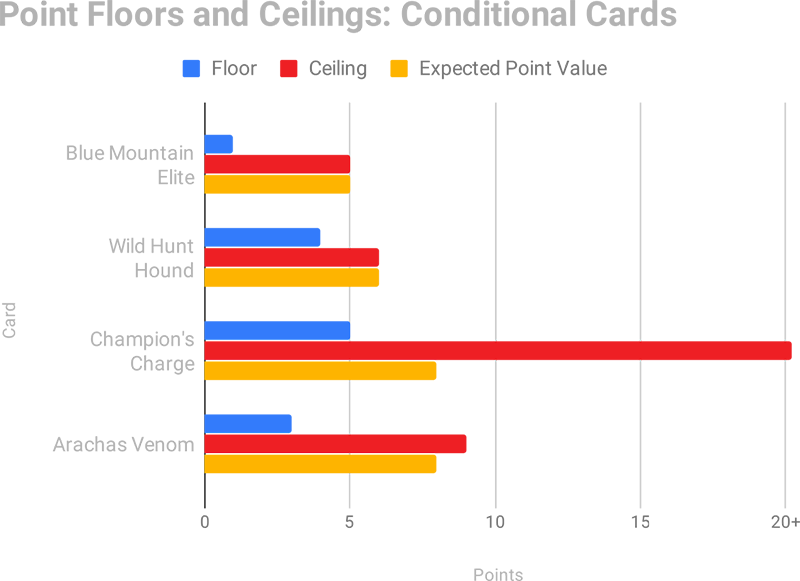 With Blue Mountain Elite and Wild Hunt Hound, we see the ceilings and the expected value are the same. Usually, the conditional nature of the card would make it generously costed, but since these two cards are removal, they have extra value beyond their raw numerical points. They actually are achieving 5 + removal utility with expected value of 5. Champion's Charge is a niche card in a conditional disguise (Bloodthirst). Depending on whether the condition is met, it can be very undercosted with 5 points for 8 provisions. Arachas Venom has a very skewed provision cost, so that the card only achieves expected value if the condition is completely fulfilled - and this may be why it does not see much play.

Finally, we will see some versatile cards and some unconditional cards. Interestingly but perhaps predictably, we do not see much difference between the disparities of the floors and ceilings of the versatile and concrete cards. 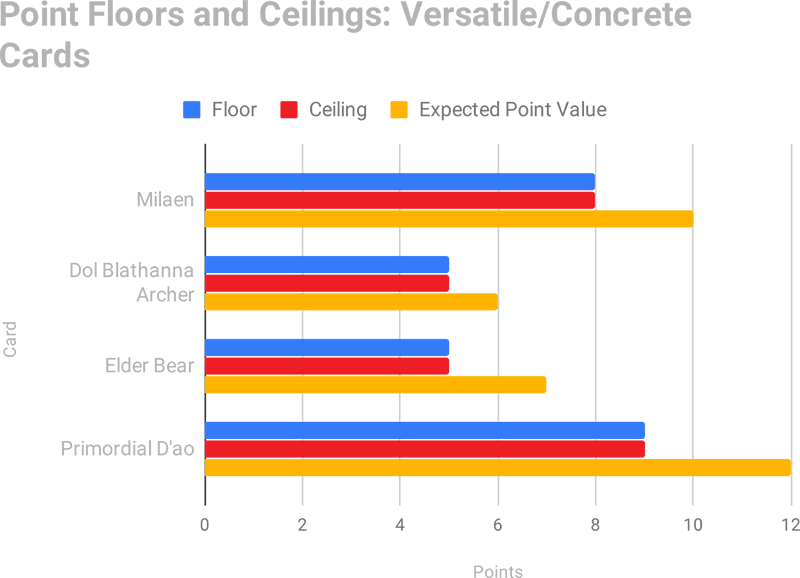 Milaen and Dol Blathanna Archer are similar in that they have removal and point manipulation, and pay a number of points roughly proportional to their respective power levels. Elder Bear pays 2 points for an extremely consistent 5-value points, and Primordial D'ao pays 3 points for a concrete 9 points. The higher payment can be attributed to Primordial D'ao being Neutral (and therefore a little more flexible) or the higher power value.

Recap and the Big Picture

We can take these characteristics into account when deckbuilding - a balanced deck takes into account both sides of the point equation, point floor and ceiling. If there are too many cards with large floor-ceiling disparity, consistency might be lacking, but if there are too few, the point output may not be able to compete with that of other meta decks. Similarly with niche and versatility, including some of the niche cards that fit the deck’s archetype is beneficial, but too many may backfire, so some versatile cards for adaptability across any matchup will help increase overall win rates.

As for conditional cards, a few of them can increase the PPP efficiency, provided that their condition is relatively easy to fulfill. Even though too many concrete cards can cripple PPP, some are necessary to provide matchup-independent points. In Big Woodland or a similar deck relying on big units, that provision deficiency is made up by the fact that the concrete point cards like Old Speartip fulfill the conditionals of many conditional bronzes and increases points of Consumes, increasing their point values to be well above their expected value, and indirectly making Old Speartip worth more than its 13-for-15 would seem.

These factors also contribute to card balancing decisions in many nuanced ways. As previously discussed, niche cards can be subject to rebalancing because their niche use provides too many points or too much consistency. Xavier Lemmens, Schirrú, and others were balanced because of this, to either decrease their point output or tweak their niche use case.

Conditional cards can also have their conditions changed because they are being achieved with too much consistency to justify the increased PPP. Some Reveal archetype cards were nerfed either by way of their conditional effect because it provided too much extra value too often (Deithwen Arbalest) or by way of increasing their provisions because the extra point/provision efficiency was too much to be balanced.

So, the delicate battle between these pairs of card attributes influences the dynamic of Gwent everywhere - during the heat of battle, the strategic exercise of deckbuilding, and the fine art of balancing.

Thanks to everyone who reached the end of this series, and I certainly hope you learned something that, if not changed your lens of view into Gwent, at least added a fresh new filter to it. 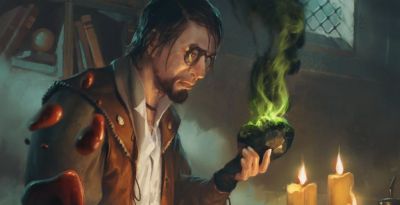 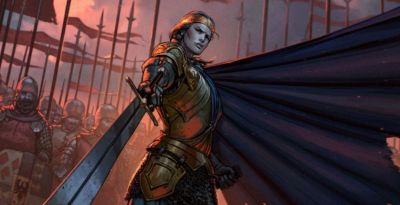 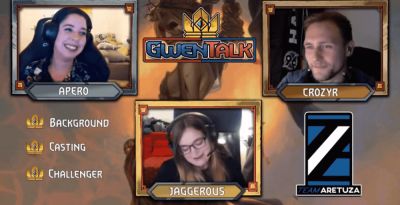