In CD Projekt Red's own words, "We believe that these changes will lead to a more diverse meta and lessen the number of 'auto-include' cards for certain decks." How well does the December 2018 Update meet those goals?

Following a hotfix to Artifact and other recruit costs, Gwent has received its first between-seasons update with an extensive list of changes. A breakdown by faction follows.

The Witcher Trio, Roach, and Other Neutrals

Among the most notable changes, Eskel, Lambert, and Vesemir (collectively the "Witcher trio") and Roach all had their power reduced from 4 to 3. As neutral gold cards that combined to form a single-turn play of 16 power, these four cards had reached the feared "auto-include" status across factions. In the early days post-update, CDPR appears to have met its goal of making the Witcher trio into cards played in select rather than all decks. A 9-power play that thins two cards from the deck (12-power and three cards with Roach) remains strong, but is more in line with what faction-specific gold cards can do.

While CDPR has changed many more recruit costs than powers or abilities on cards, the case of the Witcher trio shows one of the few shortcomings of the otherwise ingenious provision system. Moving the Witcher trio up to 8 or even 9 recruit cost from 7 apiece would not change how powerful the play was, only the power of the rest of the deck. Further, when cards are near-ubiquitous, the effect of changing the recruit costs would have been to make all decks weaker, and thus the Witcher trio would have become even more important as a play within those decks.

Reducing the Witcher trio's power takes those cards out of "auto-include status," while leaving them at 7 recruit cost keeps them as an option for decks such as Emhyr Witchers. Similarly, dropping Roach from 4 to 3 power creates a question of whether to include the card rather than a 9-recruit-cost obligation. In addition, the "redraw nerf" that took the fourth redraw away from King Foltest, Crach an Craite, and Filavandrel aén Fidháil is an indirect nerf to all redraw-dependent cards, Roach and the Witcher trio included. 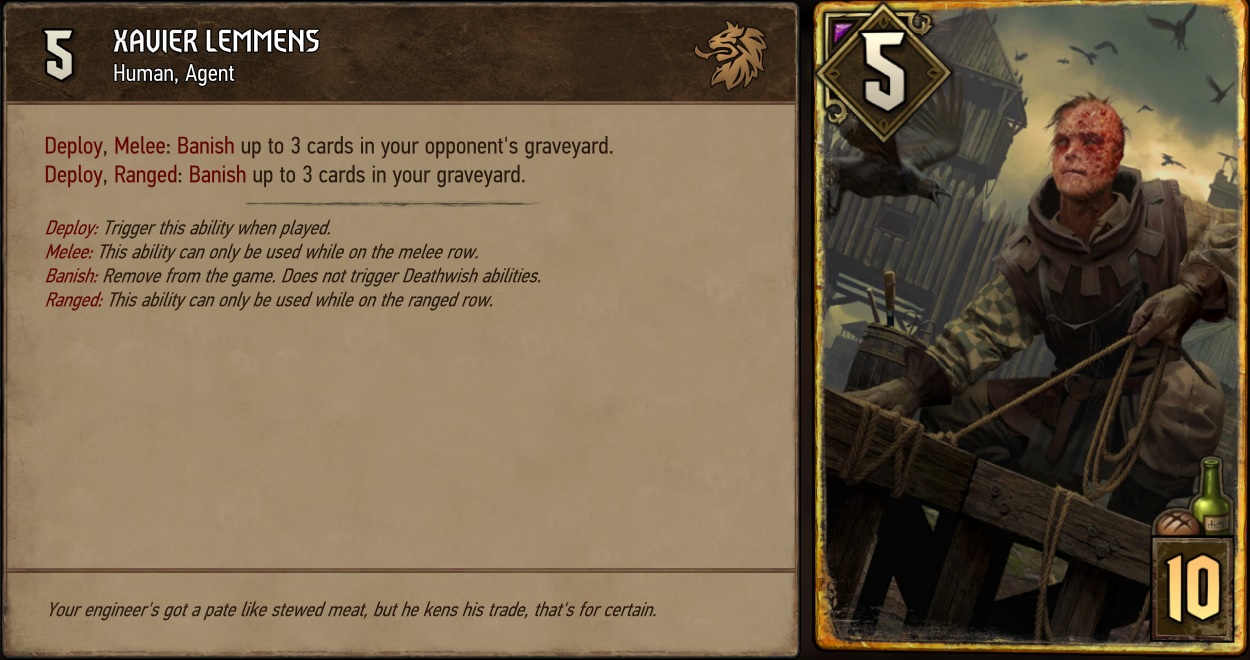 Other cards had their abilities reworked. While Xavier Lemmens can still harm graveyard-reliant decks by banishing up to three cards, it is no longer tantamount to a one-card win against a significant chunk of the metagame; however, CDPR must not have thought this change was enough and raised its recruit cost from 8 to 10. Similarly, Wolfsbane received a rework to damage all units, not merely the opponent's, and a recruit cost increase from 8 to 9. Less radical but still substantial changes affect Geralt: Igni, which now requires 20 power on an enemy row rather than 15, and Ciri: Dash, which now draws a card after 5 turns rather than 4.

Bomb Heaver is an unusual case. While its power has gone down, from 4 to 3, so too has its recruit cost, from 6 to 5. Suddenly Bomb Heaver becomes attractive to a wider range of decks, with the effect of putting Artifact cards more at risk across the metagame. One interpretation is that the Bomb Heaver recruit-cost reduction is a tacit admission on CDPR's part that Artifacts are more polarizing than hoped, and that a broader rework is in progress.

And that rework is needed, particularly for Mastercrafted Spear, which remains an absurdly powerful card for control strategies. The Artifact-based metagame has turned inward enough that Woodland Spirit control decks using Immune creatures specifically to defeat Mastercrafted Spear strategies have appeared. While new Gwent Game Director Jason Slama called out Sihil as an issue during the Gwent Roadmap stream, Artifacts in general have become a problem CDPR must address, and soon. 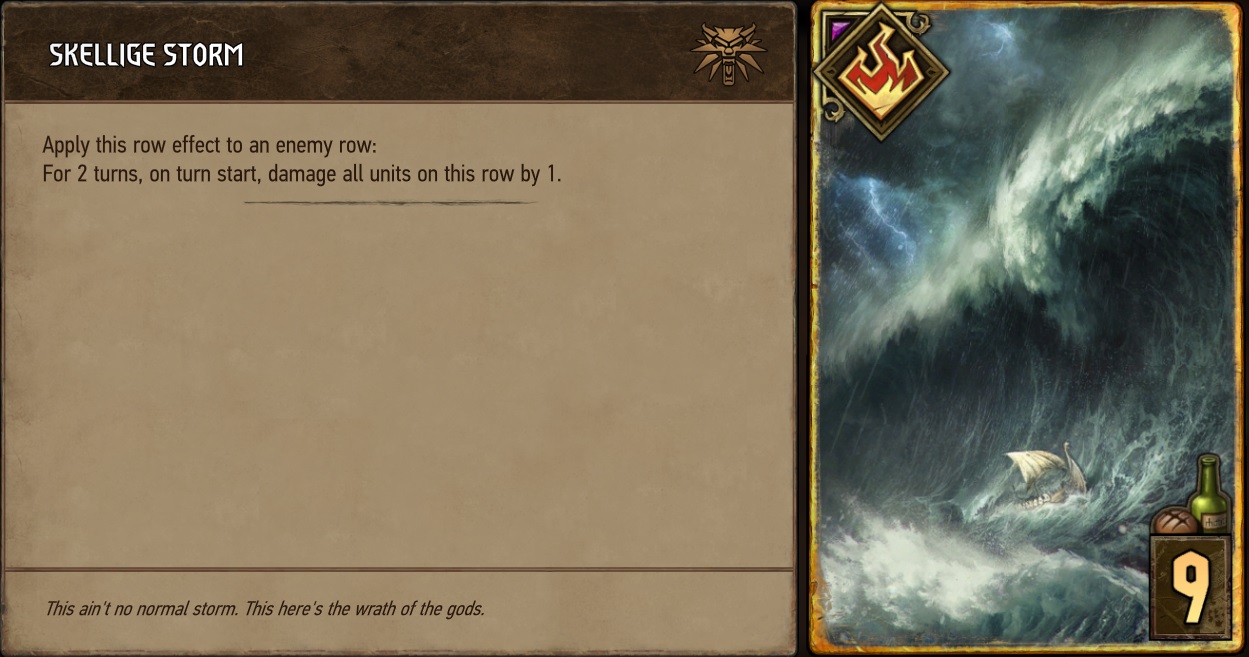 Alongside recruit cost increases to an assortment of highly powered neutral cards (Regis, Dragon's Dream, Scorch, and so on), a handful of cards saw reductions. Among these, perhaps the most intriguing is Skellige Storm, down from 10 recruit cost to 9, which becomes an option against decks with many small creatures. Dragon duo Saesenthessis: Blaze and Myrgtabrakke also got 1-recruit-cost discounts, making them more attractive to control decks that want pinpoint damage to set up cards such as Wolfsbane, Regis, and Scorch. Team Aretuza streamer shinmiri2 also notes that the reduced recruit costs for those two Dragons open up possibilities for Dragon-themed cards such as Eyck of Denesle.

Finally, some cards received boosts that seem a touch pointless. A deck that did not want Elf and Onion Soup as a 7-recruit-cost card, for example, is unlikely to want it at 6 recruit cost. Similarly, Iris' Companions is a play-it-or-don't card for its card-finding ability, and increasing its power from 4 to 5 neither makes the card more attractive to decks nor makes decks that already run it appreciably better.

Among leaders, Eredin Bréacc Glas saw a slight nerf (boosting a unit by 3 instead of 4 while giving it Immune), while Arachas Queen received an extra redraw, up to 2 from 1, which may help Consume-based strategies become more consistent. Notably, Woodland Spirit, which helmed a Tier 1 and two High Tier 2 decks in Team Aretuza's November Meta Snapshot, saw no changes.

Among cards, Forktail received the most notable nerf, not only going from 5 to 4 power but also 5 to 6 recruit cost. Alpha Werewolf also went from 5 to 4 power, though this change may prove immaterial in certain decks with 5-power units. Caranthir Ar-Feiniel lost 1 point of power, though his ability is far more consequential than his raw points. Ruehin's recruit cost increased by 1, while Wild Hunt Warrior lost its Reach restriction.

Among leaders, Crach an Craite lost a redraw, going from 4 to 3; this change does not appear in the Update Notes.

Skellige cards saw 1-recruit-cost increases to stock bronzes Savage Bear and Drummond Queensguard, and a 2-recruit-cost increase for engine/combo piece Lippy Gudmund. Wild Boar of the Sea took a double hit, down to 5 power from 4 and up to 11 recruit cost from 10, while Gremist went from "broken" to "easily interacted with" by making his Alchemy graveyard casting an order rather than a deploy ability, giving the opponent a one-turn window to respond. The only buff was to Udalryk an Brokvar, down to 6 recruit cost from 7, which may or may not see more use as players experiment with the risk-reward of damage on an Order ability. 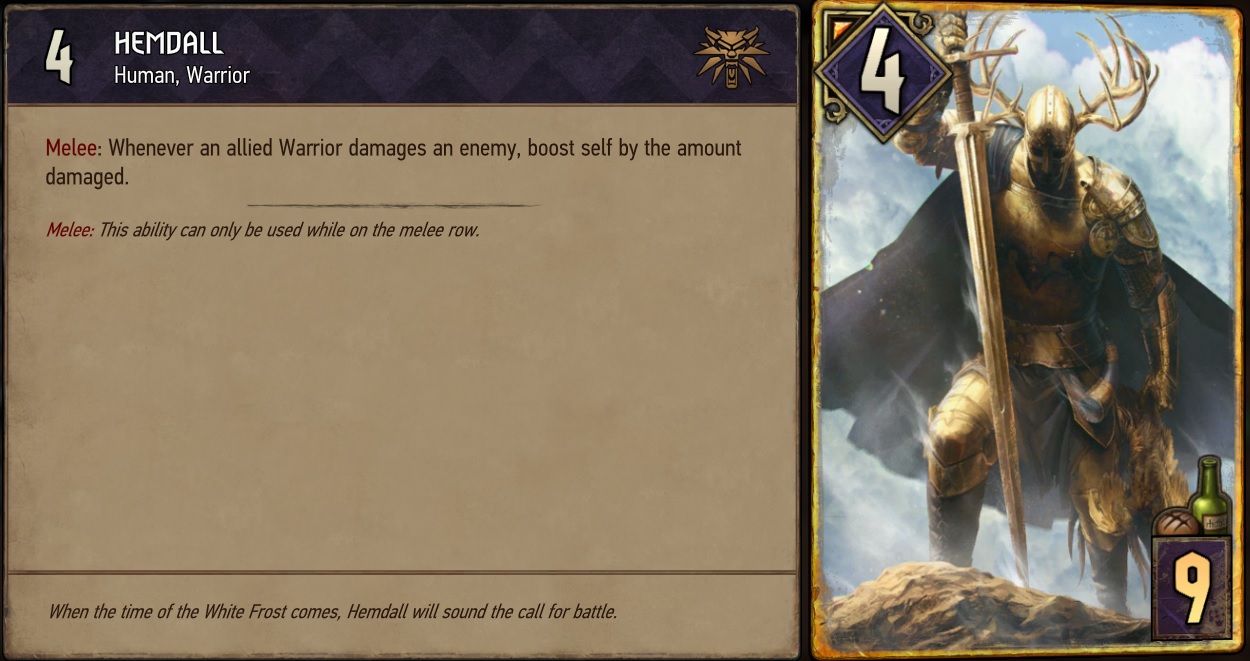 The Update also introduced one new card, Hemdall. This Warrior engine led deckbuilders to experiment with it in Eist Tuirseach lists, though so far their efforts remain in the lower tiers.

Northern Realms, though widely perceived within the community as the weakest faction post-Homecoming, saw more cards weakened than strengthened. That said, shinmiri2 believes Northern Realms is one of the big winners of the Update, as the many nerfs to controlling cards mean engine cards such as Lyrian Arbalest are more likely to survive.

Among leaders, the heavily played King Foltest lost a redraw, from 4 to 3, while King Henselt gained one, from 2 to 3.

Several Northern Realms cards saw ability changes. While listed among "Game fixes" instead of under Northern Realms, Botchling no longer resets its power after transforming into Lubberkin. Rivian Pikeman's conditional damage decreased to 2 from 3; Prince Stennis lost a charge, going from 2 to 1; and Damned Sorceress lost a point of reach, from 2 to 1. Sabrina Glevissig lost a point of damage, from 3 to 2, though it did receive a 1-recruit-cost discount, from 7 to 6, as minimal compensation.

Otherwise, the usual recruit cost increases to highly played cards and discounts to less-played ones appear. Foltest's Pride went from 8 to 9, and Anna Strenger from 6 to 7, while Reynard Odo went from 10 to 9, perhaps giving Charge-based strategies a boost, and Trebuchet and Reinforced Trebuchet went from 6 to 5.

Two leader nerfs hit the Scoia'tael faction, one widely expected, one less so. With Eithné Control so dominant in November, Eithné's rework to have only four single-point shots of damage across the game is no surprise; time will tell, however, if the rework is a mistake, as a player who wins one of the first two rounds without using her abilities suddenly has four shots to use in the final round, up from three. Less expected was Filavandrel aén Fidháil's loss of a redraw, from 4 to 3, though this might have come from a general principle to cap leader redraws at 3, as no leader has more redraws than that post-Update.

Several Scoia'tael cards, mostly from Eithné control and handbuff strategies, took power nerfs. Dol Blathanna Bowman went from 3 to 2 power, as did Dol Blathanna Bomber. Milva went from 4 to 3, while Blue Mountain Elite took a severe restriction with Reach: 1. In recruit cost increases, two cards went up, Panther and Vrihedd Officer, both up from 5 to 6 recruit points.

On the other hand, several cards within Scoia'tael received buffs. Half-Elf Hunter's reach was upgraded from 1 to 2, Malena received Zeal to make her more useful, and Sheldon Skaggs increased in power from 2 to 3. Three recruit costs went down: Isengrim Faoiltiarna and Gabor Zigrin from 10 to 9, and Mahakam Volunteers from 6 to 5. Have Dwarfs been given enough help to become a viable archetype?

Three of Nilfgaard's four leaders saw changes. Morvran Voorhis received a "nerf," in that it no longer boosts an ally by 4 on revealing a gold card but only by 2 consistently. However, instead of getting to use the ability once per round, players instead can use 3 charges whenever they wish. Saving all charges for Round 3 yields 6 points of power and three cards revealed, which could make the next evolution of Reveal decks even more powerful than before. Two other Nilfgaard leaders received an extra redraw, with Emhyr var Emreis going from 2 to 3 and Usurper from 0 to 1.

Nilfgaard's nerfs seem to be aimed squarely at the much-played Reveal archetype, with Deithwen Arbalest damaging by 1, down from 2, and Daerlan Soldier losing a point of power, from 4 to 3. Several key recruit costs went up as well, including Slave Infantry (from 6 to 7), Recruit (4 to 5), and Sweers (8 to 9). Only two buffs appear, with Hefty Helge getting an extra point of power (2 to 3) and False Ciri losing a point of recruit cost (8 to 7).

In terms of "nerfs," CDPR has handled things largely with skill: using provision costs to adjust when that is appropriate, decreasing power when that is necessary, and reworking mechanics when all else fails.The major metagame decks uniformly are weaker, though the degree to which they are affected is far from uniform. Giant Woodland decks, for example, have had to adjust far less than Eithné Control. On the other hand, when CDPR has chosen to buff cards, the logic is less readily apparent, as the modest changes made seem unlikely to move cards from little-played to a reasonable part of the metagame.

The handling of leaders, Morvran Voorhis and Eithné in particular, raises questions. Though their reworks nominally reduce their power overall, building around them so as not to use their abilities in Rounds 1 and 2 leaves them even more powerful in Round 3. There has also been a general "flattening" of the redraw structure, as only Bran Tuirseach and Usurper sit at 1 redraw and all other leaders now have either 2 or 3. Fortunately, leaders are due to receive a rework that will solve most of these issues.

Finally, the lack of a rework for Artifacts is disconcerting. Perhaps, as noted above, one is in progress and the lowered provision cost for Bomb Heaver is a temporary stealth nerf until the rework is in place. Still, Artifacts remain polarizing in that they require Artifact-specific interaction. So long as this state remains, Artifact versus anti-Artifact will define Gwent's deckbuilding principles and metagame.